Capricorn Woman And Leo Man – An Opposite But Strong-Willed Match

How compatible are Capricorn women and Leo men mentally, emotionally and sexually? The Capricorn woman and Leo man share one main personality trait- they are both strong-willed. The earthy female goat marches far and true while the fiery male lion barrels ahead without fear. They both reach their goals just in a different manner. And that is their best starting point.

The social life of these two sun signs is almost opposite, for she is more of a homebody preferring intimate gatherings, and he strives to be the center of attention at any outing. If the Capricorn and Leo meet it’s because he notices her standing off in the corner, coolly observing her surroundings.

The Leo man is intrigued by her gentle strength, and once he starts a conversation she tries to look beyond the larger-than-life exterior to see what’s beneath. The Capricorn woman finds that he is just as ambitious as she is, and she appreciates his drive for success. He notices the same thing in her, acknowledging a desire he feels as deeply as she does. For him, it’s a rare thing to come across a woman who matches his intensity for achievement.

But the Capricorn female doesn’t offer much more information, and he finds it challenging to get her to open up about herself. Of course, he enjoys a good dare, and he does everything he can to move their love relationship to the bedroom. If she feels he is a worthy partner, and the Leo male certainly keeps up with her tenacity, she will allow it.

This is where both the zodiac signs will have to compromise for complete satisfaction, for the Capricorn woman is slow and steady and he is fast and furious. As an earth sign, she enjoys the physical pleasure from sex but she doesn’t throw herself into it as much as others. She doesn’t need frills and thrills. The Leo man, on the other hand, is passionate and exciting. He’s all about the primal experience and he wants his partner to feel the same.

Both Capricorn women and Leo men are noble creatures outside the bedroom as well. The Capricorn woman is all about work ethic, and she strives to be the best and to have the best. This appeals to her Leo partner, who shares in this desire. 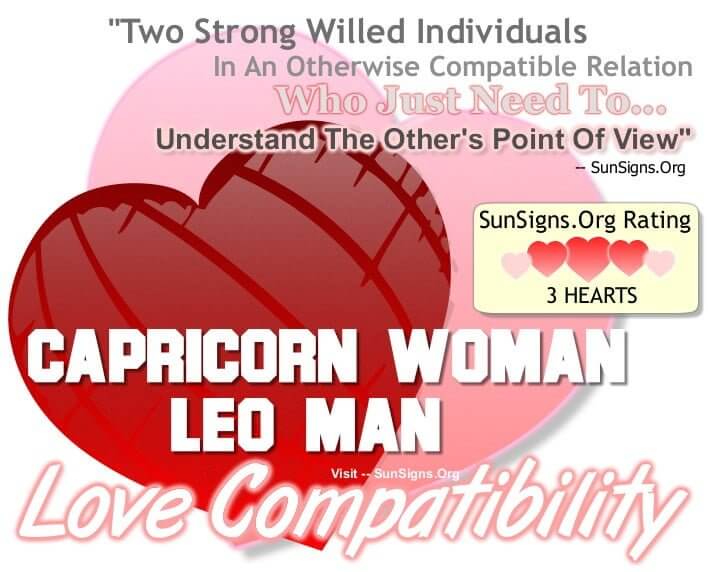 Unfortunately the Leo man won’t get the same reaction as himself in matters of sex from his Capricorn lover, and he might find her cold and distant. He needs to fawned over and admired, and she finds this ridiculous.

The Capricorn woman is not one to stroke his ego, and he’s highly offended by this. The Leo male feels he is king of the castle, but she’s queen of her emotions, and her detached manner drives him crazy.

If they are to have a harmonious sexual union, he will have to come down from his high horse and the Capricorn female will have to compliment him and his technique. But if they can do that, they will find they have a very honest and reliable sexual partner.

The only thing that will get in the way of the Capricorn woman Leo man love compatibility is their tendency to take control. He is a natural born leader and she is incredibly sturdy, so they each try to take the reins when it comes to making decisions. And they also share in having a stubborn personality, so neither one will back down without a fight.

Capricorn is a cardinal earth sign whereas Leo is a fixed fire sign, the Capricorn woman Leo man compatibility gets a THREE Hearts rating. The Capricorn Leo stubbornness will come up time and time again, and they will have to work together to find some kind of compromise. But if they can relinquish a bit of control and focus on their common goals, this couple will be a powerhouse for the ages!