After their Sun Sign, most people seem to pay the most attention to the vacillations of Mercury. Even people outside of the astrological community seem to be aware of Mercury’s influence on their lives.

One of my friends who works for the State of Pennsylvania tells me that his office manager posts signs up reminding people when Mercury goes retrograde so that people remember to be patient with each other and communication delays and snafus. (That doesn’t really surprise me, though. Pennsylvania has always been a quirky, wonderful state. If you haven’t been there, you should visit.) 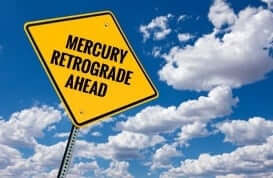 Mercury is the planet of communication in all forms. It covers writing, speaking, the internet (and all technology), contracts. Any medium where we communicate with each other is ruled over by this planet in astrology. However, Mercury also rules over the intellect, reason, and learning in general.

When Mercury goes retrograde, all these areas of our lives get a little “wonky.” (Let me stop here and take a moment to make sure we are all on the same page regarding a piece of vocabulary, because there is nothing worse, in my humble opinion, than a writer who casually uses profession-specific lingo without defining it for his non-professional audience.

Retrograde is a word that astrologers use to describe the apparent movement of planets from our vantage point here, on Earth. When looking up at the planets, some of them appeared to move backwards in our sky at certain times.

They really weren’t moving backwards, but they appeared to be. This “backwards” movement was termed retrograde by astrologers.

When crafting a natal chart for a person or an event, these retrograde planets give a different set of meanings to be considered.) Mercury goes retrograde three times every year, and so, for many people, it may seem like they are constantly confronted by this phenomenon.

Astrologers readily advise their clients not to sign any contracts during a Mercury Retrograde. Invariably there will be miscommunications in the contract if someone ignores this advice. That means don’t buy houses, make any other major purchase, or start a new job during this time.

It is equally important for people to take the advice of my friend’s office manager and be patient with other people (and yourself) during a Mercury Retrograde. Fights between friends and lovers are much more likely during this time of the year. You will struggle to communicate your thoughts correctly, and you may be less inclined to hear the message behind their words as well.

Mercury’s influence in astrology is so closely tied to the Italian God who bears the same name, that no thorough discussion of this planet’s influence can be complete without addressing that god’s mythology in some small part.

Mercury is a trickster spirit of the crossroads. He can point you in the right direction or lead you astray with unfortunate consequences.

In Rome, Mercury was closely associated with commerce. In Celtic lands, he was a spirit of prosperity, fertility, and healing, according Judika Illes in her book The Encyclopedia of Spirits The Ultimate Guide to the Magic of Fairies, Genies, Demons, Ghosts, Gods & Goddesses. Outside of the traditional Roman Mythology that we all learned about in school, Mercury is heavily associated with Alchemy and the Occult. He is a spirit of magic.

Remember that I said that Mercury doesn’t just influence our communication; it also influences our thoughts and our reason. Now, having a bit of the mythological context under our belts, this becomes more clear. When we stand at a metaphorical crossroads in our lives, we need to be careful about the choices we make.

This is important because they will shape our immediate (possibly our long-term) future. Mercury, as a trickster and a crossroads spirit, has a tendency to play games with us during these moments. Even under the most ideal circumstances, which is why it is crucial that you not make major life decisions while Mercury (the planet) is retrograde. The likelihood that you will be led down a path you don’t want to traverse is much more likely.

If you have a major decision to make in your life, wait until Mercury planet goes direct. Direct is the opposite of retrograde. It simply means that the planet has begun moving forward again from our vantage point here, on Earth.

If you wait for Mercury to be direct, you will be more likely to communicate your thoughts effectively, understand the message that other people are attempting to communicate with you, technology won’t be blowing up like crazy, etc.

Share
Previous Are You Competing With Her Ex? 6 Signs She’s Still Pining for Him
Next Lunar Scheduling