What does Neptune in Pisces mean? Mostly, this season will become the greatest moment in your life. Basically, your hard work will pay you the fruits that you deserve. In other words, never stop going after the things that you love. Equally, keep looking at the things that will make you successful.


Neptune in Pisces luck shows that God will promise you a better future because you are doing the right things. Besides, no one will ever take your gift because it is something inside you. Notably, when something is planted, you expect to see it again. Moreover, God will give you whatever you expect in life.

The Neptune In Pisces: Personality

Known as the biggest dreamers of the zodiac, it’s no surprise that the ruling planet of Pisces is Neptune. They spend a lot of time living in a fantasy world they create to escape the harshness of reality. That is why Neptune in Pisces is known to be highly imaginative.

In astrology, Neptune represents instincts, illusion, spirituality, psychic abilities, intuition, occult, and confusion. Neptune in Pisces always has big plans in mind. But they often lack the organization and discipline needed to follow through on those plans.

They would rather put together a grand time in their mind than go through the motions and the crazy effort it would take to carry it out. Their physical energy doesn’t match their creative process, and things can get lost in translation. This is why Neptune in Pisces tends to forget about important events or even simple day-to-day responsibilities. (This can lead to problems in relationships). 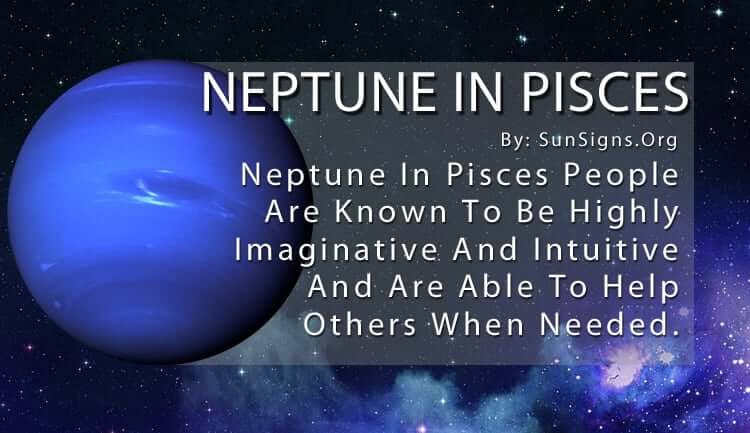 Basically, your problem is not a lack of funds but is how you manage your emotions. In other words, make a change now and expect to create something that will give you better produce.

But because of their sensitive nature, Neptune in Pisces is also highly intuitive and can help others when they need it most. You don’t usually have to ask them for help either. They can tell when people are hurting or struggling, and they can put themselves in anyone’s shoes. (Take the Spiritual sign test).

Generally, Neptune in Pisces woman wants to be perfect with everything she does because it is part of her to make the family great. On the other hand, Neptune in Pisces man shows that every man has the belief that when you align your thoughts with actions, then you will achieve what you are looking for. More so, congratulate yourself for meeting the person of your dreams. Specifically, you are with the person who will help you accomplish your dreams.

The ability of the Pisces Neptune sign to sympathize and empathize with people makes them the perfect person to come in and help. They know exactly what is needed, and they will put in the effort at that time to get it done.

They tend towards being a martyr, which means they aren’t afraid to sacrifice themselves to aid others. This is when they feel most useful, so you can trust them to follow through on a caring mission. Notably, in your mind, the sacrifice you are taking now will take you to the destination that you want.

Neptune in Pisces, people get so consumed by the reality they create in their minds that all other things fall away. But when they get called out on their forgetfulness, they only retract further into their mindset. Because they are so sensitive, those around them have to be careful when trying to get them to fall in line.

The only thing Neptune in Pisces zodiac sign has to be careful of is those who want to take advantage of them. Because they are so trusting, they can also be gullible. They tend to let people walk all over them because of it. The other side of this is their potential to spiral down into drugs, alcohol or nicotine addiction when they are confused or disappointed.

Is Neptune in Pisces Good or Bad?

They sometimes don’t know how to handle challenges or unexpected changes. So, they use any means necessary to escape from the reality of a tough situation. There is always the threat of substance abuse with someone who prefers fantasy to reality. Besides, if you want to be a good person, then you must have the ambition to make your day a better place for tomorrow.

It’s up to their large social circle to keep them from falling into depression. If they get lost in their mind, it can be challenging to find them and pull them out from their illusion. But give them a problem to solve or a person to save, and they will be right back in the game. More so, God’s way will lead you to happiness because it is the true path to light. Equally, in order to get to where you want to go, first, obey the rules of your journey.

While they may fail in completing everyday tasks, the Neptune in Pisces will do whatever is necessary to protect people. This is why they often have a large social network consisting of people from all walks of life. They have an open mind and are very accepting of everyone. This is why they can understand what others are going through and why they can help them.