How good or bad is the love compatibility between a Cancer and Scorpio emotionally, mentally and sexually? Read on…

When Cancer and Scorpio are in love, it is bound to be an emotional ride for the both of them. Both these signs are intense when it comes to their emotions, but in different ways. Because of this fact, these signs can help to balance each other out. Although the Cancer and Scorpio love compatibility can balance out each other’s emotions and work with their differences, it is really their similarities that help to keep this couple together.

The Cancer Scorpio soul mates two have a passion for each other, and a drive to keep the relationship stable and strong. If these two can really work together then they should be able to accomplish all of their goals.

Cancer is a mentally strong sign that can adapt to any situation if they need to. Because they have this personality trait, it is easy for the other signs to trust and depend on them. They also make a loyal friend who has no problem with being depended on. They are always there for the people who they care about.

Whether it is as a friend or a romantic partner, the Cancer Scorpio relationship is almost bound to last for a long time. There is one thing that a Crab cannot stand though, and that is people who play with their emotions.They are not a toy to be played with, and they are respectful enough not to toy with other people’s feelings. All that they ask for is that same respect. They tend to be a very emotional sign, and at times they can have some trouble controlling their own emotions. They are not the violent type though; they are more likely to cry than they are to fight when they become upset.

The Scorpio star sign is also a sign full of intelligent people. This is also an ambitious sign who craves success. They are likely to spend much of their time alone when they are at work or when they are enjoying their hobbies. They just tend to get more work done this way. However, they can be social, which is one of the ways that they become so successful. The Scorpion simply knows who is the right person to talk to for the right task. They are also a natural leader, so they may want more than their fair share of responsibility within the Cancer and Scorpio compatibility.

The Scorpio person’s emotions tend to be complicated, and they are likely to need help when it comes to sorting out their feelings. However, they will want to be alone when they are upset, so a Cancer will have to work hard to gain their trust so they can help them when they are feeling blue and keep the Cancer Scorpio compatibility up and going. 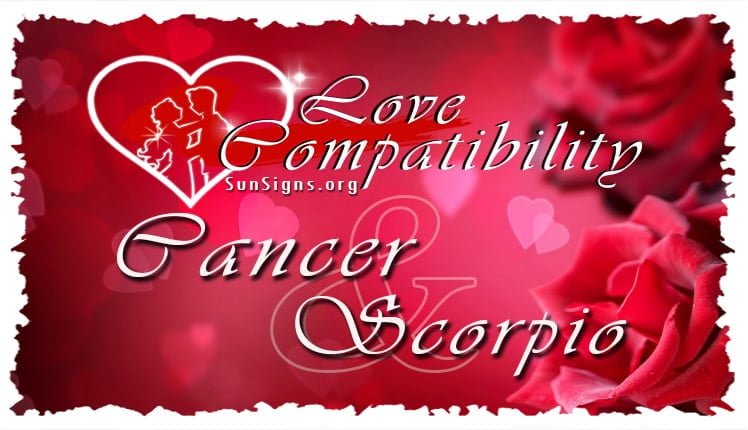 The Cancer Scorpio love compatibility has some matching and opposite qualities, and when they get together they can make a great match. Let’s look at some of the pros of a Cancer woman being in a romantic relationship with a Scorpio man.

The Cancer woman is great at understanding her Scorpio man’s inner thoughts and feelings. He may seem deep and confusing to others, but she knows what it is like to have complicated emotions and she knows exactly what she needs to do to help him when he’s down.

On the opposite end of things in this Cancer Scorpio compatibility, the Cancerian will teach the Scorpio male how to be more open with his feelings so that she can better help him. These two understand each other so well that they have no trouble communicating in the bedroom. The Cancer and Scorpio in bed always know how to satisfy each other sexually when they want to.

Now let’s look at what it is like when a Crab man is in a romantic relationship with a Scorpion woman. There are subtle differences between genders of the same sign, so this Cancer Scorpio friendship has some slightly different pros to it. These two people are rather attached to each other, and they will do whatever they need to in order to stay loyal to each other. There is not much on this earth  that could make either one, in a Cancer Scorpio marriage cheat on, or otherwise betray their partner. They know how to respect each other, and that takes them a long way in this relationship.

Like the Scorpio man, the Scorpio woman will also try to hide her true feelings at times, but the Cancer man is filled with a deep sense of intuition when it comes to everything, especially his lady, and he can almost always sense what she is feelings. As she gets to know him better she will be able to sense his feelings as well. Practice for this skill usually starts in the bedroom where they test their intuition by guessing what the Scorpio sexually wants, and usually they are spot on and are able to fulfill each other’s sexual desires.

However, there are some cons to this Cancer Scorpio love compatibility. Sometimes these signs cannot balance each other out, and that is when the problems begin. Although the Scorpio man likes to hold the power in the relationship, every once in a while he will let his Cancer woman make some large decisions.

Once she has a taste for power she will want more and more of it. This can lead to her becoming possessive and controlling of her man. This will make him feel highly uncomfortable, as well as less manly. This is one small thing that can make a big dent in his ego.

One thing that annoys the Cancer woman when it comes to her Scorpio man is how stubborn he can be. She will want him to be more open with his feelings and thoughts. She will want to be with someone who she can share everything with, and sometimes it is hard to do that with a Scorpion. This can lead to the woman feeling blue and wanting to be away from her Scorpion man at times.

Like the Cancer woman, the Cancer man also has his fair share of mood swings. If this happens early on in the relationship, then the Scorpio woman may not know what to do. This will either annoy or make the Scorpio woman feel poorly about herself, causing her to want to be alone. This causes the Cancer Scorpio in love to feel upset, which is obviously no good for anyone.

Until the Scorpio female learns to help with the Cancer man’s emotions as well as better express her own there will be this problem within the relationship. Having clashing feelings can be frustrating within this Cancer and Scorpio compatibility. But once these two people learn to get to know each other better they themselves will be able to work with their partner’s, as well as their own, feelings. Although it is still a con to the relationship, it is a problem that can be fixed easily with some time and effort.

Overall, there are more pros than cons to a Cancer and Scorpio love compatibility. While things might seem tough in the beginning, if these two can learn to work together and play off of their strengths as well as accepting each other’s weaknesses, then it is highly possible that their relationship will be a blissful one that lasts for years to come.