Scorpio Woman And Cancer Man – A Spiritual And Wonderful Relationship

How compatible are Scorpio women and Cancer men mentally, emotionally and sexually? As water signs, the Scorpio woman and Cancer man have a great spiritual connection. She is generous and loyal while he is intuitive and deeply invested in their relationship. While the Scorpio woman Cancer man match may encompass separate ends of the emotional spectrum, they are capable of working through their minor differences together and making this love compatibility an excellent one.

Even though they share the same ruling element, the female scorpion is more social than the male crab. The Scorpio woman is at the center of attention without even trying, and the Cancer man will notice her first since he is standing outside of the crowd. But she will most likely make the first move once she spies him off on his own.

The Scorpio female immediately recognizes a soul as deep as hers when she sees one. And their conversation will affirm her suspicions, as he joins in her many meaningful discussions. Because the Cancer male is one of the more intuitive sun signs, he is able to see further into her soul than any other sign, and she is impressed with his range of perception.

She is able to look into his soul as well, and finds that his mood swings can often dominate his personality. Luckily, the Scorpio woman understands the pull of emotions because she is always keeping hers in check. And that’s a big part of what leads this Scorpio Cancer couple into the bedroom.

Here is where these two zodiac signs really meet, for he is a knight in shining armor for any woman. He will do what it takes to please his mate, starting with various romantic gestures and ending with her deepest desire.

The Cancer man doesn’t even have to ask, he already knows what she wants. And his Scorpio lover wants unbridled lust and passion, for this is where she unleashes her intense emotions.

While the Scorpio lady may hold back in the real world, there’s no mystery when it comes to what she wants between the sheets. And he is willing to match her step for step with whatever approach she chooses. And she will be the one doing the choosing, for he has no issues with her taking the lead.

This is something she greatly appreciates, and adds to not only her enjoyment, but that of her lover as well. All the Scorpio female has to do is offer him some reassurance that their sexual union is strong and satisfactory, and she will have a mate for life.

And she will offer her devotion as well, which helps to maintain a harmonious relationship outside of the bedroom. Even though the Scorpio women don’t need a man to help with their affairs, they welcome the fact that the Cancer man takes care of his.

Cancer men are often financially secure and very careful with their money, only spending it on things that will improve their life and the life of their mate. The Cancer man will create a comfortable household for both of them, and she will love coming home to it. 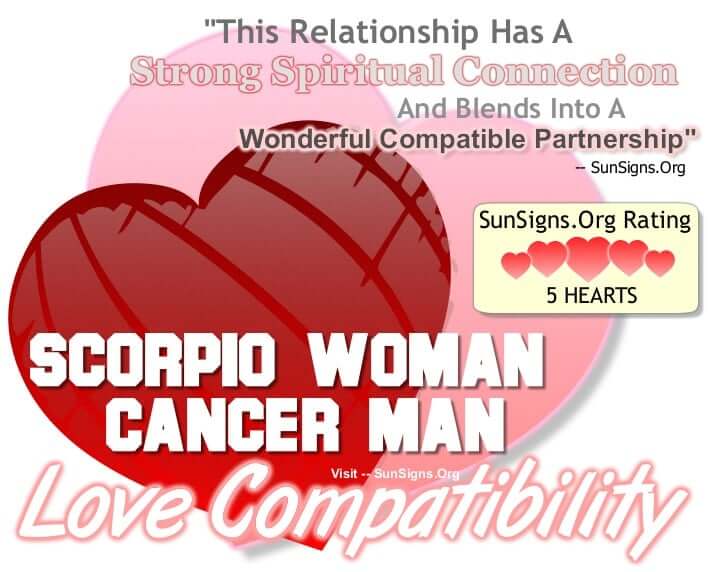 The only thing that may create tension between the Scorpio and Cancer pair is his mood swings. While she understands how difficult it can be to control your feelings, she also prides herself on being able to do so. The Cancer male may drive her crazy, causing her to unleash her stinger.

This will cause him to retract into his shell, and it may take a long time for them to resolve their issues. But if the Scorpio woman can dial back her anger and he can defend his actions, they will find the common ground they need to build a solid life together.

Scorpio is a fixed water sign whereas Cancer is a cardinal water sign, the Scorpio woman Cancer man compatibility gets a FIVE Hearts rating. The relationship between the Scorpio Cancer pair is one of the best amongst all the zodiac signs.