How good or bad is the love compatibility between a Cancer and Leo emotionally, mentally and sexually? Read on…

In a Cancer and Leo relationship, both are able to have trust and mutual dedication towards each other that is sure to last a while if the two can put a little bit of effort into their budding romance. Both these signs understand the importance of being there for each other.

The Cancer Leo in love are able to provide each other with devotion and love that other signs may have trouble trying to provide. This Cancer and Leo compatibility is likely to be comfortable and secure, and laced with traditional family values.

Cancer men and women alike share many of the same traits, one of which being that they are great at adapting to the current situation. If something out of the ordinary happens, they are not likely to be thrown for a loop. They are great at composing themselves in odd scenarios. They may not like surprises, but it doesn’t take long for them to get used to something new.

The Cancer zodiac is also a loyal sign, and they are bound to respect their partner so long as they are respected in return. This isn’t a sign that is likely to cheat on their partner. The crab is a great friend and partner because of how dependable they can be. Anyone who dates a Cancer can be sure that they will be there for them. The main issue with a Cancerian is that they are poor with their emotions and their self-esteem levels. They will need to depend on someone else to help them to feel better about themselves and their situations at times.

The Leo star sign is independent, and they will need their space in a relationship. Like Cancer, they can be loyal and others can depend on them. They like to do their jobs alone, but they love spending their free time with people who support them. They will make a great partner, so long as their partner is encouraging and supportive of what the Lion  loves. If they do not share passions, then it may not work out.

It is likely that a Cancer and Leo love compatibility will develop when will meet their romantic partner at work or while they are doing one of their hobbies. They spend most of their time doing these things, and they are more attracted to people who love what they do. Leo is the happiest when they are successful, and so there is no doubt that a successful relationship will make them happy. Leo will do whatever they can to make sure that a Cancer Leo friendship does not fail. 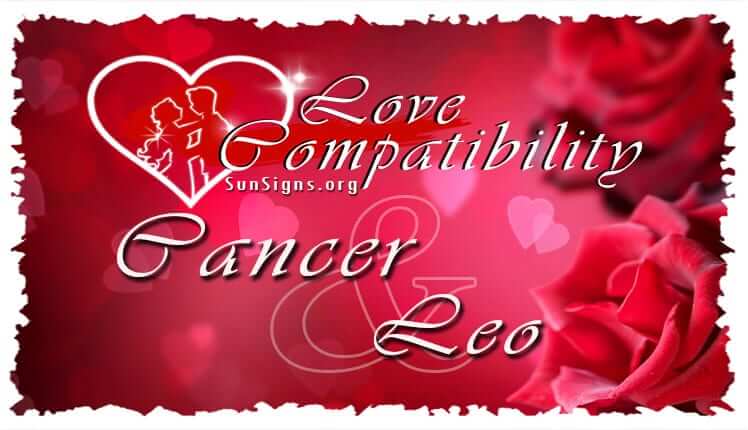 The traits from both of these signs are able to work nicely together to make a loving Cancer Leo compatibility. Let’s look at the pros of a Cancer woman being in a romantic relationship with a Leo man.

A Cancer woman will likely be attracted to a Leo man because she will be able to tell that he is dependable and has a steady lifestyle. This is great for her because she would love for her life to be more stable, and she will be glad that this sort of romantic partner will not complicate her life.

The Leo male will be attracted to her soft and gentle nature. The Cancer lady seems like the type of romantic partner who will be loving and gentle, which she usually is. He will want to be in charge of this relationship, making all of the big decisions for the couple. She won’t love this idea, but so long as he continues to respect her, then it can turn out alright. Also, the sex between the Cancer and Leo in bed is almost bound to be great because of these signs deep emotional connection and of course, the passion between them. (Read about Leo sex traits).

Now let’s look at the pros when the roles are reversed, when a Cancer man is in a romantic relationship with a Leo woman. There is usually an instant connection in this Cancer and Leo love compatibility. It is not likely that they will be long-time friends before entering into a romantic relationship. The Leo woman is sure to give plenty of attention to the Cancer man, and in return he compliments her plenty, which she loves.

When the Cancer Leo marriage gets into the tough spots the Lioness will do whatever she can to fix the problem. She hates to fail, especially in her relationships. It is sure that she will apologize after a fight if she knows that’s what she needs to do in order to make things better.

The Cancer Leo soulmates don’t fight often though because they share many of the same hobbies and passions. This will make the Cancer man all the more attractive to the Leo woman because she especially loves other people who love the same things that she does. Neither member of this Cancer Leo love compatibility are afraid to work hard, making this a rather stable and secure relationship.

There are some cons to this relationship though. Sometimes the Leo man can be too controlling with his boss-like attitude. Sometimes he may forget to take his Cancer woman’s opinion into account when he makes an important decision. At other times, he may not even ask her what she thinks of something. This could do some damage to their relationship if he doesn’t catch himself when he does this.

The Lion is also likely to spend a lot of time at his job, trying his best to work his way to the top. While the Cancer woman realizes that the Leo man needs to be successful to be happy, she would also like him to be home more often to spend time with their family if they have one together. She tends to be sensitive, and she may go between lashing out at her partner for not being around enough, or she may simply cry and want to be alone.

The Leo man is not the greatest at dealing with other’s emotions, and this may make him feel uncomfortable because he won’t know what to do. At the same time, the crab will become even more upset because he is not helping her. This Cancer Leo compatibility will not go well if these two cannot learn to take each other’s feelings into account on a daily basis.

There are, however, some cons to a Cancer man dating a Leo woman. The Leo woman in love will also want to be in control of this romantic relationship. She simply feels like she knows what is best for this couple. This can make the Cancer man feel a little less masculine than he would like to feel. She can be a bit demanding compared to what the crab is usually used to. He can tend to seem more sensitive than the kind of guys that a Leo woman might usually date. This difference between them is likely to cause problems from time to time.

In this Cancer and Leo compatibility, the two simply have trouble understanding each other’s emotions at times. The Leo woman can also spend a lot of time at work instead of at home. The Cancer man is likely to be confused by this, thinking it should be the other way around. He sometime wishes that she had more traditional values and that she was more motherly. There is a big difference when it comes to the couple’s value on family, which could easily cause there to be some issues between the two causing them to breakup.

This Cancer Leo love compatibility will start quickly and it is likely to be a passionate romance in the beginning. If these two signs want to be able to make their relationship last for a long time then they will need to put some effort into this. So long as these two signs can learn to take each other’s feelings into account when it comes to their decisions, then the Cancer dating Leo should be successful.