How good or bad is the love compatibility between a Cancer and Pisces emotionally, mentally and sexually? Read on…

The Cancer and Pisces love compatibility in a romantic relationship is almost bound to be peaceful. Out of these two, the Cancerian has their feet planted on the ground while Pisces has their head in the clouds. This can cause problems in the relationship at times, but at other times it adds adventure to their love life when they get to learn new things from each other.

Both the Cancer and Pisces in love can be emotional at times, but this means that they can more easily understand their emotions and help each other out, which some other matches cannot do. This shared personality trait is likely to be able to bring this couple closer together.

The Cancer zodiac is a sign full of contradictions within their personality. This is an emotional sign, and this trait can come with many ups and downs to it. Cancer is a sign that is likely to be plagued by mental disorders such as being bipolar, depressed, or filled with anxiety. The Crab may also have social anxiety. They love to make new friends, but they are often too shy when it comes to talking to strangers.

If someone has feelings for a Cancer, then they need to be the one to make the first move. Once friends or a romantic partner with someone, they will be loyal and kind. They love to help out their friends whenever they can, and they will never cheat on their partner. When Cancer is in love they will do their best to be as romantic as partner. They want a stable, but fun relationship. Hopefully A Cancer Pisces relationship will be able to deliver this.

Like the crab, Pisces is also a moody and emotional sign. It would be wise for the Pisces and Cancer to become soul mates because they would be able to understand their feelings and help them through whatever problems they might be having. They love making new friends, but they care more about keeping their old friends. They are shy sign, and they are also burdened with low self-esteem a lot of the time.

The Fish crave support from their friends or romantic partner whenever they try something new or while they are working on a project. They need constant reassurance that they are doing something right. Pisces is also what we could call a daydreamer. They love to fantasize about the future and about alternate scenarios for their life. They might be the type of person to start writing a fiction story with their ideas. While this Pisces personality trait gives them some great creativity, it often makes it hard for this sign to focus. 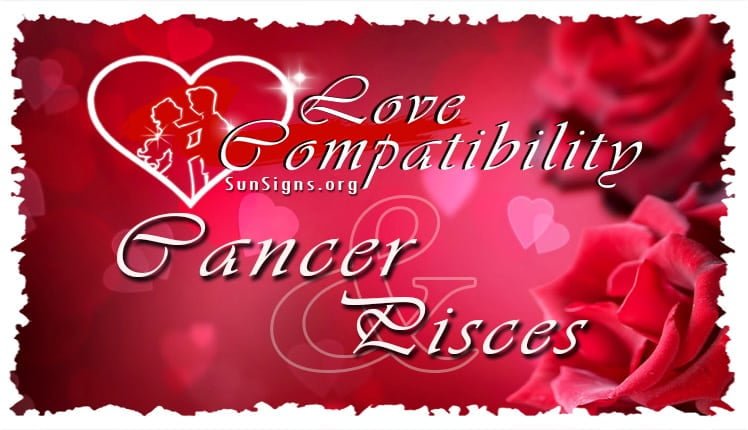 Although in a Cancer and Pisces friendship, both these signs are shy, when it comes to making the first move Cancer might step out of their shell and ask the Pisces on a date and let them know that they are interested in them. It is likely that the Piscean will act shyly when confronted with this confession, but they will be flattered as well. While meeting up in the first place might be awkward, once the two signs get to know each other it will become clear to them how similar they really are.

They are bound to talk about several things which they are both passionate about, and this will be a great start to their relationship, even if it is a slow start. “Slow and steady” could be the motto for a Cancer Pisces love compatibility. These signs are also both used to having emotions that they cannot exactly control. This couple will be able to tolerate each other’s emotional outbursts, comfort each other’s sad mood swings, and relish in the moment when they are in a wonderful mood.

The Cancer Pisces compatibility is is a great pairing for signs when it comes to understanding each other’s emotions. There are not very many other star signs that are emotional as the Cancer or Pisces, and because of it they can better understand each other. The Cancer and Pisces in bed are sexually compatible in all aspects.

Pisces is a more easygoing sign than Cancer, and they can easily teach their partner how to take life at a slower and more relaxed pace. At the same time, Cancer can teach Pisces how to take their life more seriously. In this way they can help to balance each other out while still keeping their relationship stable. These two are great at communicating with each other. They know that it is best to talk out large decisions with each other before they do anything. Cancer person can be a perfectionist of a sign at times, which is great when the couple needs to find out all the details about a certain decision.

Neither one of these signs in the Cancer and Pisces compatibility make all of the choices in the relationship. They both look at every angle of the situation together, and sometimes they even take turns in making a choice. In a Cancer Pisces marriage, both are loyal and loving in nature, and they reflect this trait in each other. They are caring and they never do anything to intentionally harm each other, although their emotional outbursts might hurt each other’s feelings at times. This couple will never cheat on each other. They value each other too much for that sort of thing.

As perfect as these signs seem, the Cancer and Pisces compatibility will still have problems in their relationship from time to time. Let’s look at some of the cons to a romantic relationship between these two sun signs.

While these two do have a lot in common it doesn’t mean that they agree on everything. When the Cancer Pisces couple are trying to make a decision and they don’t agree on what they want the outcome to be it may lead to problems. These two are great when they agree, but when they disagree they don’t want to fight it out, they would rather give each other the silent treatment until one of them budges to their will. This usually takes a while on the off-chance that it does work. Most of the time it will just be annoying to both.

Also, Cancer is a sign that craves attention from their partner to know that they are doing well in their relationship. Pisces tends to zone out, or get preoccupied in another project, and will forget to give their partner all the attention that they need, which could lead to the Crab feeling blue or uncared for. The Pisces birthday will need to work on giving Cancer enough attention if they want things in their relationship to run smoothly.

The Fish’s dream job often is something dealing with the arts or something where they get to travel. It is hard to get those jobs or to make a lot of money off of those kinds of jobs, which can make it hard for the Piscean to contribute much to the family funds. Cancer will also get annoyed at time when their partner does not contribute much to keeping their household financially stable. This can make them feel uneasy and like their relationship is as unstable as their finances and decide to breakup. (Get your Financial Astrology Reading).

They may not know how to talk to Pisces about things like this because they tend to want to avoid communication when they know that they are doing something that upsets their partner. They will grow silent and avoid their partner until they can think of a way to resolve the solution or until they think that their partner has forgotten about the problem. This can lead to a fair amount of awkwardness in the Cancer Pisces love compatibility at times. However, many of these problems can be resolved if both members of this relationship can put a little extra effort into communicating and understanding each other.

While this Cancer Pisces compatibility has its ups and downs, there are many more high points than low points to it. If these signs simply take more time for each other, and less time worrying about things that don’t matter, then the Cancer and Pisces relationship can be harmonious and wonderful. These two signs are highly compatible because of how similar they are. There is little room in this romance for trouble.