How good or bad is the love compatibility between a Cancer and Libra emotionally, mentally and sexually? Read on…

Cancer and Libra compatibility is so good that they can help to complete each other. This relationship is likely to start out slowly as these two get to know each other, but as time goes on Cancer can teach Libra to be more in touch with their emotions, and the Libran can teach the Crab to work more with their intellectual side. The Cancer Libra soul mates are different from each other, but it is their differences that can help to bring these two signs together and help them to stay together as well.

Cancer can be an emotional sign. Their life is affected by mood swings, but this helps to make this sign adaptable. This sign doesn’t easily get thrown off by changes that might more heavily affect some of the other signs. This Cancer zodiac trait makes most Cancer men and women highly reliable. Other people know that they can depend on them because of how quickly they can adjust.

Others have known that they will not be thrown for a loop if they need to make a change to a plan. Cancer is a sociable and calm sign, so they will easily forgive someone if they are to make changes to dinner plans or another activity. They also make a loyal friend, as well as a romantic partner. It is highly unlikely that a Cancer would ever cheat on their romantic partner. They care too much to ever hurt someone like that, especially someone who they love.

Libra star sign is an optimistic sign. They tend to have a positive view on how they look at the world around them. This great attitude helps a Libra to draw friends and romantic partners to them. Libra is a social sign, so they love that they tend to draw people towards them. Other people tend to like having a Libran around for their insightful look at things as well as their peaceful disposition. Libra often has a low work-ethic, which means that bosses and coworkers may not make the best of friends.

Libra is smart enough to get the job done, they just tend to procrastinate. They are also indecisive when it comes to many non-work related issues. They will need a romantic partner that can help them to make choices without deciding for them. Libra is an independent sign, and they won’t want someone else to control their life. They also crave for sexual excitement in their relationship. (Read about Libra sexuality). This goes along nicely with Cancer adapting quickly to change in the Cancer Libra compatibility. 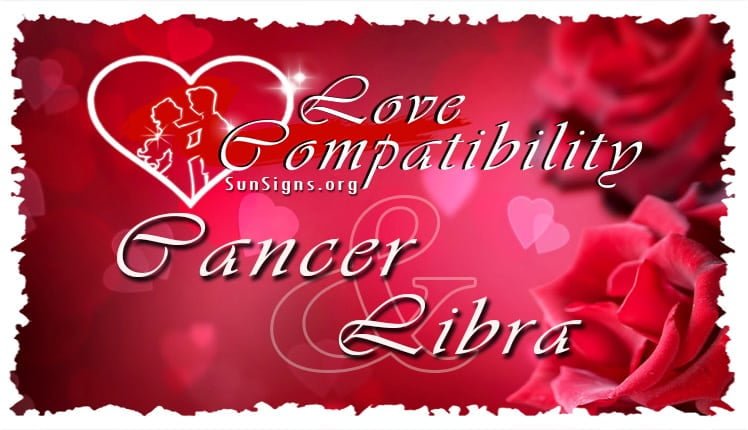 As you can see, the Cancer Libra compatibility have many traits that seem to work well together. Now lets look at the pros of a Cancer woman being in a romantic relationship with a Libra man. This Cancer and Libra relationship will work well together because they are both looking for a secure and stable bond, which they are both able to provide for each other. The Libra man is more romantic than men of some of the other signs, which will please the Cancer woman in his life.

Cancer women are usually very loving and she will be able to respond wonderfully to her Libra man’s actions. Both members of this Cancer Libra love compatibility are able to respect their partner’s opinions and actions. The Libra male know the importance of being independent, so he won’t argue with his woman’s beliefs often.

These two will treat each other nicely; there are hardly ever fights or arguments between the two. Sometimes it takes a while for these two to fall in love, but once they are in love, they are sure that it is true love, and not just a honeymoon effect or puppy love. The Cancer dating a Libra often does not have sex until they are in love as well, but once they do get around to getting in bed together it will be a passionate, but loving experience for both of them.

Now let’s look at what it is like when the genders are reversed and it is a Cancer man who is in a romantic relationship with a Libra woman. While these are the same signs, their genders have some effect on the outcome of the relationship. Here are some pros of this Cancer Libra love compatibility. This couple is a romantic one that is there for each other no matter what happens. These two signs are great at balancing each other out.

The Cancer man is more emotional than most men, and at times he needs some help with sorting out his emotions, which his Libra woman can do. She is a peaceful creature and she will want to be with someone who has a stable lifestyle so the her life can remain calm. Luckily, the Cancerian is able to provide that kind of stability.

If this Cancer Libra friendship lasts for years, then they are likely to get married and start a family together. The Cancer man likes to stick to traditional values, so it wouldn’t be strange if this couple did not have sex until they were married, or at least in love. As time goes on, this Cancer  and Libra compatibility will only become more committed to each other.

However, there are some cons for this seemingly perfect Cancer and Libra love compatibility. As compatible as these two people are, they might just be too compatible. Once in a committed relationship these two tend to spend less time with their other friends. This can even cause this couple to lose friends as their relationship gets stronger.

The Libra man loves to socialize, so this may affect his attitude and weaken his communication skills. At times the Cancer woman can also be possessive, which makes it more likely for this scenario to happen. The Libran is loyal to his partner, and he will not want to upset her by going out too much. He is also an independent man, and he probably won’t like that this mate is dominating his social life.

The Cancer woman in love may not even realize how possessive she is being, and he is likely to defend herself, rather than apologize, if she is accused of keeping the Libra man away from his other friends. Also, if the relationship does seem to have problems, these two signs will have lost touch with some of their friends that would have been able to help them in a situation like this. They will not know who to turn to for help other than each other. This can bring more stress into the relationship.

The Cancer man also has a tendency to be possessive and jealous at times. This can make the Libra woman feel uncomfortable, as she wants her independence. She realizes that the Cancer man is only like this because he cares about her so much, but she would prefer it if she was still allowed to talk to other men without it being a problem.

Another problem might start in the Cancer and Libra marriage when it comes to spending money. The Cancer man takes pride in how he works hard to earn the money that he gets, and he won’t like it when the Libra woman spends her money freely. He can’t come to terms on why someone would want to spend their money on flashy things rather than home improvements. (Get your zodiac financial traits).

Also, sometimes the Libra lady is too relaxed for the Cancer man’s tastes, especially when it comes to parenting. He feels like he has to take on the bulk of the responsibility when it comes to raising his children. He will become stressed and this will negatively affect their relationship if the Libra woman does not learn to help out more.

The Cancer and Libra love compatibility is an idealistic romance with both members of the partnership will enjoy much of the time. There are far more pros than cons to this relationship. This love is an enduring one that can last from the first date to having children together. So long as these two can balance each other out nicely and support each other through the years, then this pairing should be able to last for years to come.