You are a Cancer if you were born between June 22nd through July 23rd. One way to describe the Cancer woman traits would be to say that she generally has a soft and kind personality.

The Cancer woman personality is usually very loving and caring when it comes to friends and family members. When the Cancer female is young it is likely that she will be close to her female family members, especially her mother. When she is young she will likely want to grow up to be a mother or a nurse, rather than a receptionist or a construction worker.

The Cancer woman personality traits show she will do the best she can to watch over the people who she cares about. She only has the best intentions and she will help whenever she can. 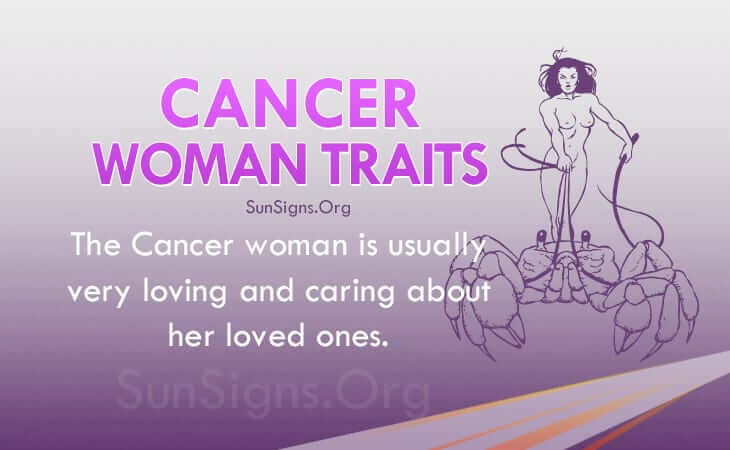 This may make the Cancer woman seem like she hovers over people too much, or like she is overprotective. While it is highly common for a Cancer woman personality to be overprotective of the people that she cares about, it is rare that she knows that what she is doing is being perceived as being annoying.

It is likely that she will keep on this hovering nature until someone points it out to her. Even if she is aware of it, she is not likely to change her habits very quickly. She worries about the people that she cares about, and she wants to be there and know what is going on in their lives in case something happens to them.

The Cancer lady usually has a rather calm disposition when it comes to most things, and it is rare that she will lose her temper or act out in a situation or at an event. The Cancer woman characteristics show she likes to keep herself poised so that others will think highly of her, although she thinks modestly of herself.

However, if someone is to criticize something that she has worked hard on, or blatantly tells her that she is wrong in front of her friends or family, then she won’t be happy about it. This could be one of the scenarios where the Cancer woman will be upset and will show her unpleasant angry side.

While in her younger years, the Cancer woman personality may have some trouble when it comes to making friends. The Cancer woman is usually shy and likes to keep to herself when she can. She will not want to bother others with her worries, unless it is with someone who she trusts deeply.

This Crab woman can be sensitive at times, but she doesn’t want anyone to notice this zodiac trait. She would rather that people see her as a loving mother to her child, a caring friend, or a generous community group member.

The Cancer woman personality traits show she often has a hard time keeping their self-esteem levels high. They will need to be supported by friends and family members to know that they are doing the right thing.

The Cancer woman traits show she loves getting positive feedback on what she’s done. When a Cancerian’s self-esteem is low, it is likely that she will want to be alone for a little while until her self-esteem gradually increases on its own.

When it comes to relationships, the Cancer woman characteristics show she wants to be committed and in love. Most Cancer women dream of being married one day and having children of their own. If a partner cannot commit, then the Cancer woman will have nothing to do with them.

She needs to feel like she is being loved and supported throughout her lifetime. Once she falls in love with her partner, it is likely that she will fawn over them and do her best to take care of them.

But in turn her her partner has to take care of her emotionally as well. If the Cancer woman’s partner can vow to be committed, then they should have a trustworthy and loyal relationships for years to come.