Is Cancer woman Scorpio man compatible mentally, emotionally and sexually? The Cancer woman understands the deep Scorpio man, for her waters run as deep as his. The female crab is a light, feminine energy that matches with the male scorpion’s masculine prowess. Although he may be a bit rough around the edges for her, the Cancer woman and Scorpio man can find balance in their love compatibility after some time. What is the best match for the Cancer woman?

While the Cancer woman can be emotional, her fellow water sign has his sensitive nature. The only difference is she has occasional outbursts while the Scorpio man keeps his feelings welled up inside. This makes him seem mysterious to most women, but the Cancer female has such strong intuition that she can reach through his almost impenetrable force field.

As long as she doesn’t nag or prod him too much, the Scorpio male allows her to see this side of him and even come to appreciate the gentle manner in which she discovered it. Because of this, he may be more willing than other men to deal with her mood swings. Read more about dating a Scorpio man or dating a Cancer woman.

The Scorpio man in love understands the emotional well within both of them, and he’ll offer her the sense of calm and stability that she is constantly seeking. He will be fiercely protective of her, and this will help to bring the Cancer woman Scorpio man relationship to the next level.

This is one area where the Cancer female sexually really shines, for she is very feminine and sensual. This attracts her more intense Scorpio lover, and he will do whatever it takes to send her over the edge. His kind of passion stimulates her sexual and emotional needs, and she reassures him with her love and devotion.

Once he knows she is truly his, there is nothing the Cancer woman Scorpio woman can’t do to keep each other satisfied between the sheets. The Scorpio man sexually is very possessive of his lovers, and she will give herself to him completely.

If the Cancer woman and Scorpio man zodiac signs can compromise and adapt to their partner’s quirky characteristics, they can learn from their positive attributes as well. He will be a calming influence on her, and she will help him navigate his feelings. This will strengthen their bond, and help each of them grow as individuals and within the relationship.  And once they have committed to each other, theirs will be lasting Cancer compatibility. 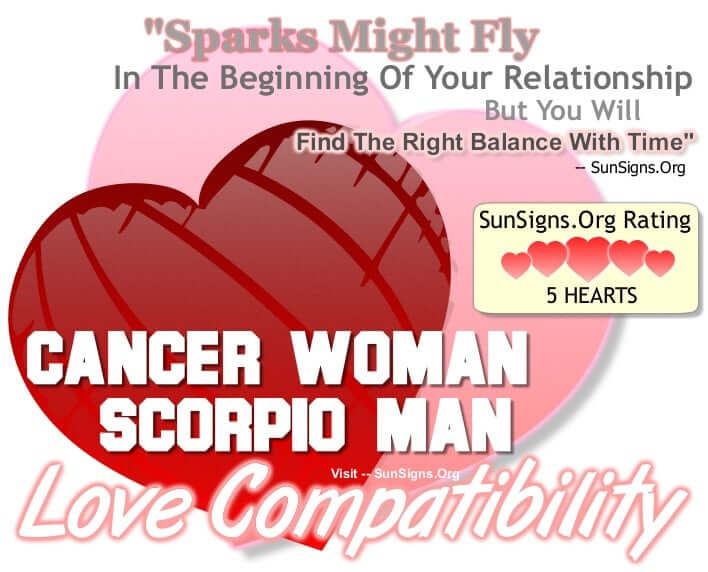 The only issue that will arise between this Cancer woman Scorpio man union is his somewhat domineering nature. She likes to take the reins once in a while so she can take care of his needs, and he doesn’t relinquish control easily. This can create problems in the zodiac match.

This is where his brash manner may get in the way of a usually harmonious union. But as long as he understands she is simply trying to please him in whatever way possible, he will tone down the ego and let her into his heart in this Scorpio compatibility.

Even though there is a mutual understanding between the Cancer woman and Scorpio man, he is not as fluid in his thoughts and actions as she is. This can bring out his stubborn personality, and if she crashes against it, he will unleash his stinger. This will cause her to retreat into her shell, not wanting to anger him any further.

Scorpio men will have to watch their hurtful remarks, and she will have to stand up for herself if they are to resolve any arguments quickly. He has to learn to be less rigid in his approach to things, while Cancer women in love will have to toughen up to deal with his often overbearing attitude.