How good or bad is the love compatibility between a Cancer and Cancer emotionally, mentally and sexually? Read on…

It is truly a loving Cancer and Cancer compatibility when two crabs come together in a romantic relationship. Since these two are in the same zodiac sign they are bound to have similar personalities and values. Let’s just hope that it’s not entirely true that opposites attract the best. Similarities are bound to bring the two Cancer dating each other together in a long-lasting romantic relationship.

Let’s start by looking at some of the traits of the Cancer male and female. Just because they have the same sign doesn’t mean that they are identical, just that they are likely to be similar. Of course, their genders can vary the way that they act upon their traits just like many other factors can. 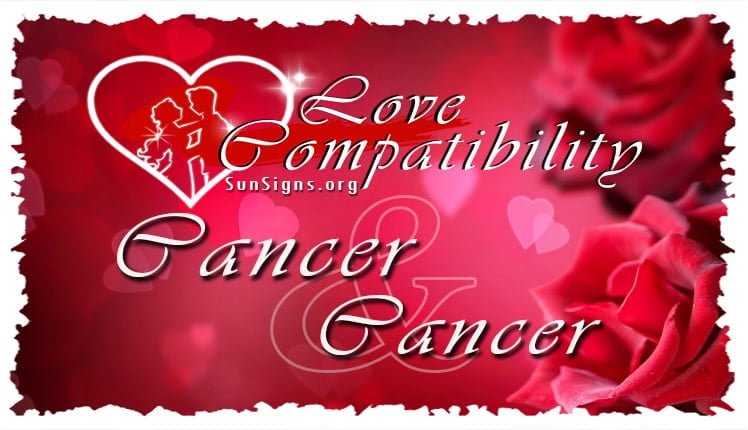 The Cancer man can be an emotional creature, but he is not likely to want to show this side of himself around people who he does not know well. He is also not likely to show his side around his male friends, as he fears that this may make him seem weak and unfit to hang out with some of his more masculine friends.

Although, if he gets close to a romantic partner then he may be more willing to show his sensitive side, so long as he knows that he can trust her with his thoughts and feelings. Even though he is not comfortable sharing his feelings at first he will still be extra polite about women who he is attracted to. This could be somewhat of a preview of what is really on the inside, something his friends may never notice about him.

Even though Cancer men may not show all their feelings to his friends, he still cares about them. He loves groups, his team, his friends, and his family. He will do what he can to make these people in his life happy. The Cancer man is also a great provider. He knows that it is important to be an asset at his workplace so that he has a better chance of keeping his job and maybe getting a promotion.

He is not an impulsive man, and will put a lot of thought into all of his decisions. This helps to make him a rather dependable man. Lastly, a Cancer man in love will really do whatever he can to stay in love. Cancer men just love being in love.

The Cancer woman also has some great traits that help to make her an appealing romantic option for anyone who wants to get into a romantic relationship. She is a rather loving creature. Once she settles down she will make a seemingly perfect mother. Cancer women in love tend to have traditional values, and look for men who have traditional values as well, which most Cancer men do. She enjoys spending time with her family when she is young, and that sense of enjoyment is likely to carry on into adulthood.

She may ask her mother for advice when she doesn’t know what to do, rather than asking a friend. She really does care about what other people are doing and how they are feeling. It may feel like she is nosy, but she is really just trying to help. This may make her seem overprotective, and she probably is. She is likely not to know that this can be annoying at times, so her loved ones usually learn to put up with it.

The Cancer female loves helping her family members and getting them out of tricky situations. Although, she would rather help with emotional issues than with physical ones, but she is not afraid to try to tackle both. The Cancer woman is calm and she loves who she is. If someone else doesn’t like one of her traits she still won’t be likely to change them quickly. She wants to be herself, and she won’t want anyone else getting in the way of that. She is especially sensitive when someone criticizes something that she has worked hard one.

Like the Cancer man, she takes great pride in her work, and she will become upset if someone else talks negatively about it. The Cancer woman rarely shows her angry side, but a scenario like this could easily bring out her temper. She is usually shy though, and she will keep her thoughts to herself.

This can sometimes make it hard for her to make friends or to find a romantic partner in the first place, but once she warms up to someone she is sure to open up a bit more. The Cancer woman, once she finds a romantic partner, will want to take care of them. She is a very maternal partner and will do her best to keep her partner satisfied and happy.

Now let’s look at some of the pros of a Cancer man and a Cancer woman being in a romantic relationship together. The Cancer Cancer in love they have the same sign and have so much in common. Their similarities are what make their relationship stronger than some of the other signs that they could be with. This is a relationship that is bound to start quickly after meeting each other. There is simply just a connection so deep and passionate that they can hardly help but to be together in this Cancer and Cancer compatibility.

The Cancer Cancer friendship has an emotional side, and once they get close to each other they won’t have a problem with sharing their thoughts and feelings. This can bring the Cancer and Cancer love compatibility to an even deeper level than they may have ever thought was possible. These two both have traditional values that can bring these two together. They are both stable in their relationship and their lives in general.

Once these Cancer lovers get together they are in it for the long-haul. It wouldn’t be surprising if this couple were to get married and have a few children together and raise them with their Cancer values. This Cancer Cancer compatibility is almost bound to last as the couple are sexually compatible in bed too. (Read about Cancer sexuality).

If anything is to break up this Cancer and Cancer love compatibility, it will be because of their passionate fights about their differences. If these two are from different cultures or religions, then they are likely to have some different values that they might debate over. Religion is a powerful thing in many Cancer personality’s lives, and having a partner who has a different belief system from their own may make the relationship hard to handle.

In a Cancer Cancer marriage, both can be stubborn, and it is not likely that one of them will make such a big conversion for the other one’s sake. Also, if one member of this couple does not want children then it could easily cause problems for the other. Most crabs love the idea of having a happy family, and it is not likely that they will want to settle down with someone who does not want a family, or who cannot have children and is not willing to adopt.

Together, the Cancer Cancer love compatibility can have a great relationship, but only if they can learn to respect each other’s differences and try to make their similarities all the more exciting. If they can stick to their traditional values and keep their lives relatively stable, then they are sure to have a great relationship together. The key to this romance, like many others, is to be able to trust and respect each other.