The 4th Nakshatra, the Rohini is named for the Moon’s favorite wife. She is personified as the head of the bull, by 5 stars in the Taurus constellation.

The Rohini birth star is the first nakshatra residing fully in Taurus. It is ruled by Prajapati, the Creator and its cosmic representation is a prominent feature in the Taurus constellation. Rohini is embodied in the five stars that create the head of the Bull.

Rohini (one of the 27 sisters that comprise the nakshatra system) was the Moon’s favorite wife and it is told that the Moon could not control his desire for her. She was the most passionate and seductive of the sisters and her beauty caused him to spend more time in this Nakshatra than he did in the others. The sisters complained to their father Prajapati, who then cast a spell upon the moon. It is said that this spell is the reason for the moon’s monthly cycle and why it waxes and wanes each month. 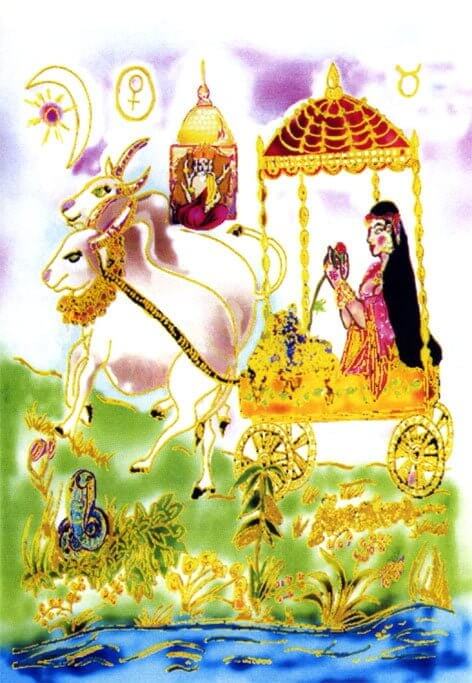 According to Vedic astrology those born under the Rohini Nakshatra tend to be materialistic, critical and have an air of entitlement to their character.

Rohini is symbolic of growth and fertility and natives can be hyper-sexual. They may even use sex as a weapon or tool with which they can achieve their goals.

Creative individuals with a taste for extravagance, they have an appreciation for beauty and the fine arts. They are also capable of amassing great wealth and they must be mindful not to be ruled by their possessions.

Natives are often fond of jewelry, cosmetics and other adornments. They generally have a pleasant disposition, are independent and have a healthy respect for authority.

Generally tall and slender with bright eyes, their smile can light up a room.

Often difficult to understand, native Rohinis seem to have 2 sides. The first is loving and gentle, while the second is tough and at times harsh. They carry the courage of their convictions.

They can be slow to accept change. When their beliefs or family are under scrutiny they can become aggressive and sometimes violent.

Emotional creatures, they follow their hearts, are free-spirited and spontaneous. Not known for their planning skills, long-term employment, financial independence and stable housing often elude the Rohini. Humanitarian to the core, forgiveness eludes them and they are prone to holding grudges in order to protect their emotions. 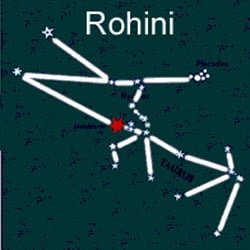 Native Rohini people have a strong work ethic, are loyal employees and are determined to a good job. Their lack of focus and patience may prove to be barriers to success. Ever trusting, they should avoid business dealings with friends and associates as the relationship may blind them of the risks and result in financial ruin.

Generally alienated from their fathers and over-attached to their mothers their married lives tend to be tumultuous.