Castles have been around for a very long time, and with age comes a diversification of symbolism. At its most basic level, castles served as homes to the wealthiest and most powerful of families. In those times, they served as one of the ultimate symbols of grandeur and protection. All who lived on the land could take refuge within the castle’s stony walls.

In addition to fortitude and wealth, castles symbolize a strong foundation and structure, strategy, sanctuary, and idealism. Because of the socioeconomic status that the owner would certainly have, castles might also take us back to the whimsical times of the past. This was when knights exhibited chivalry and maidens were in search of their Prince Charming.


Through this lens, a castle would allow themes of old righteousness and honor to arise. Additionally, these fairy tale times allow us to return to a time where dreams came true and people achieved their deepest desires- whether this was actually true or not. 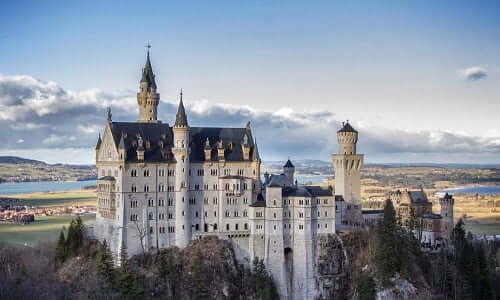 The size and financial implications of castle symbol should not be surprising. These are, after all, the literal, historical connotations associated with them. However, they are also linked to other, more personal symbolic meanings. For example, castles can speak to our cautious and conservative sides. With their massive and thick walls, castles were well guarded. There are certainly times in our lives when we need to be, as well.


Furthermore, castles can symbolize the help and support that everyone needs, but doesn’t always want to admit to, at least sometimes in their lives. Whether a castle is prompting you to accept help or offer it is up to you to determine based on your current set of circumstances. Do not let the stature of castles allow you to believe that you are above assistance.


Be strong and independent, but know when you are in above your head. There is no shame in that. Even less obviously, castles have been deemed as symbolic of incomprehensibility, at time. It’s quite difficult to own a castle nowadays and, as such, they can be interpreted as symbols of your inability to to access or attain certain things.

Like many other symbols, castles are present in Tarot readings. There, the size and magnanimity of these structures once again comes into play. They represent the idea of achieving a goal, especially after a long journey, spiritually or physically (or both). In many decks, castles are presented in the background, far away. Many interpret this as an indication of what you can expect in your future if you work hard and persevere.

Castles symbols can also present themselves to us while we dream. Throughout history, castles have served as fortifications and have kept people safe. This idea is furthered with the presence of moats. Symbolically, they represent not only physical defenses but also mental barriers. When a castle presents itself to you in a dream, then, it can have a variety of meanings.

It could mean that you have been feeling very defensive as of late and that you should perhaps re-evaluate these feelings. Maybe you are acting with excessive introversion. Are you guarding yourself too closely and not allowing anyone to get close to you? By contrast, it could be your subconscious prompting you to exercise more self-defense. As large and domineering structures, castles can also be speaking to your sleeping and receptive mind of strength and resilience. They remind us to fight through and have strength during the tough and trying times in our lives.

The symbolism of the castle goes back for thousands of years and thus has many concrete attachments. This does not mean that there isn’t room for personal interpretation and a unique perspective. Whatever meaning a castle might have to you is worth exploring and reflecting upon.