Seven of Swords Meaning In A Tarot Reading

The Seven of Swords tarot card indicates the overly clever one. The heart of betrayal and deception lay within its imagery, and the deliberate hiding of an act.

Within this card’s imagery we can see over-confidence, and absolute surety of having gotten away with this act we’ve set about. It is full of bad portents, the indicator that the deceiver will be revealed, and the thief will be caught. 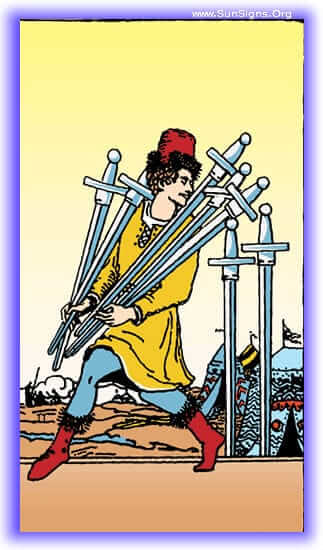 The Seven of Swords represents that most important of all questions in the life of the deceiver, the thief.  “Will I get away with it?” This card often appears to represent overconfidence when we think we’re being incredibly clever.

It unfortunately represents that time when we’ve given ourselves just enough rope to hang ourselves with. We may think we’ve gotten away with it for a while, but this herald of the Minor Arcana will catch up with us.

What did you do, my sneaky little compatriot? Whatever it is, it’s not over yet. You may think your act has gone unnoticed, but this is far from the truth. Prepare yourself for your comeuppance, your past is about to catch up with you.

Whatever it is you are currently considering doing, stop. You may think there is a way to get away with it, you may even think you’re clever enough to pull it off.

All you can do at this point is be thankful this card arrived to warn you against your current course of action. Stay on the straight and narrow, there’s a speed trap ahead.

Temptation lays ahead, sometime in the next few months you will find yourself presented with an opportunity that will appear to benefit you greatly. This couldn’t be further from the truth, not in the long run.

Avoid this temptation when it arrives, no matter how much of a sure thing it seems, the concerns the one presenting it is trying to minimize, are exactly the results you can expect. 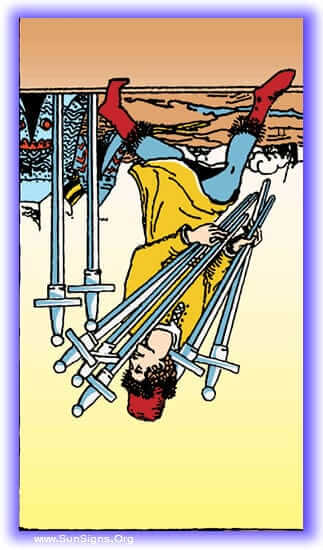 In the inverted orientation the Seven of swords represents a challenge placed before you, and a significant transitory time in your life. You are currently being held back, hesitating in taking that next big step into the future

Do no be afraid to make the changes you want to make. This is an opportunity to change the way you think and release yourself from the past. In this position, the tarot card is all about blockages.

You’ve been struggling over the past few months with a situation that is unsettling. An affair may have lost its fire and your guilt may have caught up with you.

The changes necessary to move beyond the problems in your life may just seem too much. This tarot card represents that you’ve been in a place of stagnation for a goodly long while.

It’s time, its ok. You’ve got what it takes to move beyond this barrier, and more than enough ability to break through the challenges that face you. I know it’s scary, but what lay beyond is so much greater than the stagnation you find yourself living in now. Take a deep breath, muster your courage, and move forward.

You’ve been moving along so well, growing and progressing, but there is a daunting cliff coming up ahead. You can scale it, you have the skills and equipment, but what you need to carry you over is the courage and determination. It’s within you, dig it out!

Next Tarot Card: Eight of Swords