Two of Swords Meaning In A Tarot Reading

The two of swords carry a significant message. It would be best if you kept reading to understand the interpretations. The Two of Swords in the Minor Arcana are presented as a blindfolded woman with two swords crossed in front of her. It represents a forking of the path and confusion about which way to go.

The woman is in a stalemate, with no idea of which choice will best serve her, and as such is paralyzed in inaction. They also represent perfect balance, as the swords are the same size and length and held at the same angle. 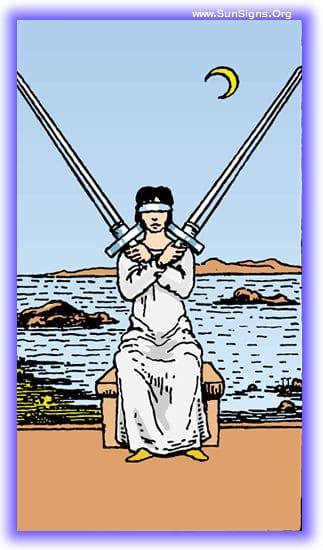 A difficult decision stands before you, needing to be made. It is a difficult one, and logic and intellect are needed to help deduce the proper way. Instead, there is a tendency to avoid making the decision, knowing that there’s a peril to choosing wrongly. Having found the proper information lacking, there is a stalemate, all of this pointing to a need to divert from traditional paths of thinking to arrive at a decision.

What do two of swords symbolize? First, it would be excellent to take responsibility for your choices and accept the consequences that come with them. Indeed every decision has an effect on you in the long run. Thus it helps to learn more ways to improve your decision-making and make your life better.

The two of swords meaning reminds you to research and consult before making a life-changing decision. One of the best ways to get unique ideas and solutions to your complex issues is by tapping your intuition. In this case, you need to find a quiet place where you can listen to the silent whispers within without interruption.

The Two Of Swords reversed tells you to pray to God to give you strength and stamina to sail through the good and bad days victoriously. Then, stay in touch with the divine beings to learn deeper wisdom. Again you need to keep learning from every obstacle and grow with every step.

The Two Of Swords tarot guide says that before you decide, consider its impact on the people around you or your loved ones. Try to get their feedback on the matter at hand instead of taking heavy issues by yourself. Again, it would be wise to avoid giving in to instant gratification but consider the long-term benefits.

The Two Of Swords career meaning that it would be brilliant to put your ideas into action instead of procrastinating regularly. Be more proactive since the only way to make better choices is to put them into practice. So put into action an idea or solution one at a time you walk your way up.

Two Of Swords Yes Or No Significance

The meaning of Two Of Swords implies that you need to keep making choices that reflect your dreams and values but not your worries. Go for a decision that leaves you feeling good and live a more fulfilling life. Be accountable for your actions and know that you have the willpower to adjust anytime you choose.

The Two of Swords tarot card signifies that it would be prudent to understand that success is in your hands and every decision contribute to the whole accomplishment. Also, you need to know that you may not control everything happening around you, but you can choose how to respond to them.

The Two Of Swords future meaning tells you to assert yourself clearly, and when you are in disagreement, learn to express your contrary view politely. Approve the things that uplift you and reject those that don’t. When you feel that your emotions are almost taking control, withdraw yourself from the scene to calm your nerves. Take a brisk walk as you practice deep breathing, then proceed with the matter when in control of yourself.

What does Two Of Swords mean in Tarot?

The Two Of Swords advice tells you that you take stock of what you have done once in a while and change the routines that never add value to you any longer. Stay closer to guys who make sober choices and are successful. Learn from them a skill or two to boost your decision-making bank.

The Two Of Swords combination reminds you always to think positive to attract positive results. Indeed what you are thinking about will shape your habits and who you really are. More importantly, it would be best to be more sensitive about what you say to who and how you say. Choose your words carefully and ensure the recipient understands what you mean. Additionally, try to plan and use your resource well. These include your time, money, etc.

Let us talk about the elephant in the room. It’s been there, and you’ve been stalling on the matter of discussing it. Whatever has held you in suspense has also held this situation not being resolved. Only a committed decision to act will solve this problem.

You’re stuck, and you know it. This tarot card shows that there is a decision coming down the path in front of you, and you are very aware that it is both presents and needing to be made. The greatest difficulty you’re facing is that both answers carry either equal merit or equal peril. This card appearing is warning you to take the time to apply logic and intellect to solve the problem, don’t jump.

The situation you’re currently involved in is about to come to a head, and when it does, you’ll be called on to make an important decision. In preparation for this, you should begin gathering your data now so that you’ll be ready to make the best decision you can when the time comes.

Yes, you can take advantage of this opportunity, though there will be no harm if you choose not to.  The options are open to you in this case, but there is much to be gained by taking this chance, all difficulty aside. 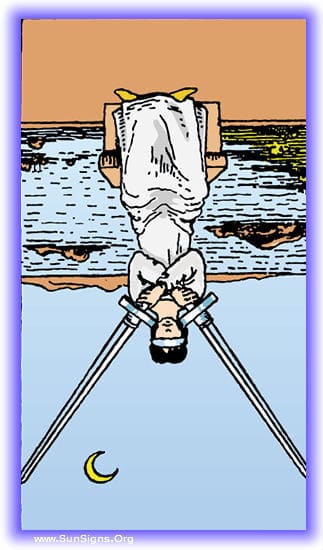 You find yourself between the proverbial rock and a hard place, with neither option available to you is a good one. Furthermore, the amount of information you have about either path is simply overwhelming or completely absent, neither extreme being helpful to you at all. Worst of all, you feel utterly stuck, and the solution may actually be not to make the decision in this case but to pass it off to someone else.

The Two of Swords in this position shows that you’ve had to make a hard decision in the past few months, and now you’re living with the consequences of that decision. Rest assured that both decisions would have led to difficulty, but either way, you have to deal with the results of your decision now.

You’re being called on to make a decision you don’t have any need to be involved with. So the main role you have to play is to help them decide for themselves. If it looks like you’re not going to be able to cooperate, get yourself out of the situation and let them deal with the ramifications of their non-cooperation themselves.

The tension is mounting, and the confusion is getting worse. You’re trying to avoid it, but the situation you’re in right now is going to come down to that decision you do not want to be forced to make. Start thinking on it now, and there’s no way around it. You will be called on to make the hard choice.

The answer in this case is No, neither outcome is going to be spectacular for you, but there is far less harm in not taking this path than taking it.  Be prepared for some fallout from standing your ground, but know that ‘No’ is the right thing to do right now.

The significance of Two of Swords tells you that you need to take responsibility for your choices and accept all their consequences.