Those born between October 24 and November 22 fall under the eighth zodiac sign Scorpio.

Symbolized by the scorpion, they are known to be deep and mysterious. It’s no surprise to know the history of this sun sign is rooted in many ancient mythologies. They are ruled by Pluto and Mars.

The Scorpio sun sign spans the 210-240th degree of the zodiac, and sits between Libra and Sagittarius. The constellation Scorpius is very bright and contains two stars, Lesath and Shaula that both mean “sting”.

In ancient Egypt the scorpion was considered a serpent-like creature, and serpents were revered by the Egyptians. The scorpion goddess Serket had a woman’s body with a scorpion head. 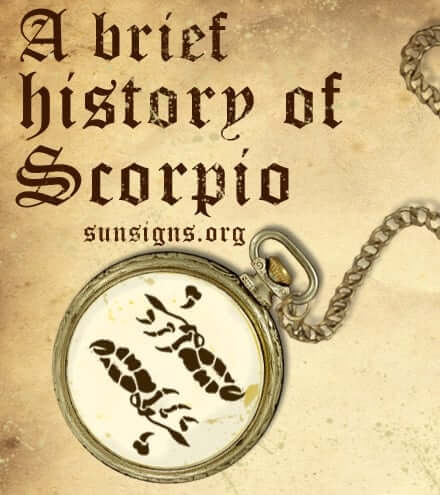 In Babylonian history there were scorpion men seen in the “Epic of Gilgamesh” who were guardians for the sun god Shamash. They would let him out during the day and close the doors when he returned to the underworld at night. Their heads were said “to touch the sky”.

A scorpion sent by the goddess Artemis (protector of all creatures) in Greek mythology killed the hunter Orion after he said he had the ability to kill all creatures.

Zeus heard the story of this great scorpion and placed him in the sky. It is said he also placed Orion in the sky, who runs away from the scorpion when it can be seen during the summer months.

The other aspects of this star sign are the water element and fixed modality. Scorpio lands in the middle of fall, when the harvest is done and everything is set in place for the next season.

People can relax and enjoy the fruits of their labor. And water relates to the emotional side of people, and anyone who knows a Scorpio knows their still waters run deep! Even though they don’t show a lot of emotion, they are very intuitive and can read others like a book.

Also, with Scorpions being ruled by Mars and then, with more recent discoveries, Pluto, they are found to possess the strong will of the warrior god Mars and the sometimes ruthless nature of the god of the underworld Pluto.

While they are usually calm and cool, they do have a quick temper that strikes just like the stinger of the scorpion. And they can be quite assertive when they want to be, which is often times during the pursuit of power or improving their status in some way. People are drawn to these strong and compelling characters without them even having to try.

Other traits related to the Scorpio sign are the genitals for anatomy, steel or iron for metal, and red or purple for the color. They are the most sexually magnetic of all the signs. They have a resolve that is steady and unmovable like steel.

They can have a fiery temper signified by “seeing red”. It’s plain to see how all of these characteristics combine to create an intense, controlled, and complex person such as those born under the Scorpio sign. No one will ever truly understand their depth.