The Neptune In Libra: Significance and Meaning

What does it mean to have Neptune in Libra? These people are peaceful by nature.


The Neptune In Libra: Personality

Represented by the scales, Libra zodiac sign looks to bring justice and restore balance in everything they do. It’s this kind of dedication to the harmony that inspires Neptune in Libra to look for problems that need solving. They can listen to all sides of an argument and mediate a solution.

Neptune in astrology represents inspiration, spiritual focus, drama, instincts, and dreams. For Neptune in Libra, their main goal is to eliminate confusion and come up with a viable answer that suits everyone.

Also, their concern for compromise helps others with their dilemma. This often makes them an effective mediator in any situation. They are great listeners, and they go into everything with an open mind so they can be an objective observer. (This is the true nature of the Libra man or Libra woman). 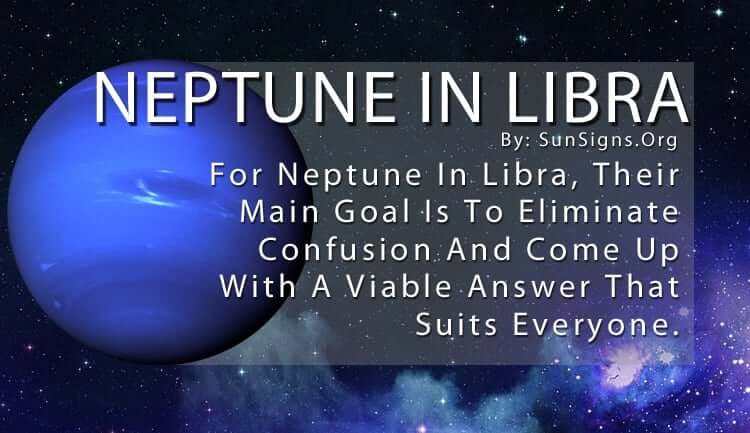 Positive Traits of the Neptune in Libra

The Neptune in Libra sign people love a good debate. As social butterflies, they have to be out and about having active conversations with people. But what gets them going the most is when they see an injustice being done. That’s what motivates and inspires them into doing something for the greater good.

Neptune in Libra is often involved in social issues. They are part of groups that help those in need. It’s this kind of environment that allows them to do good deeds and offers them spiritual enlightenment.

Negative Traits of the Neptune in Libra

The only thing that can get in the way of Neptune in Libra is their desire for everything to be perfect. Their need for complete harmony is simply unattainable in the real world. And, they often have trouble reconciling that notion. This comes into play in their pursuits because they can have difficulty running their own lives. (Find out how the Neptune sign can influence your life).

They can solve other people’s problems. But, they are usually quite indecisive when it comes to their issues. They go back and forth, weighing every option. But, they rarely settle on what is the correct one. It’s as if they are so focused on helping the rest of the world they don’t know what to do with just themselves.


Thus, they only find inspiration from outside forces. They don’t feel anything on the inside except the desire to make the world a better place. And that’s a noble cause of course. But, because they get so confused in their own lives, they can grow depressed very easily over their lack of commitment or indecisiveness. Also, their inability to create the perfect world, the perfect relationships and the perfect life can bring them down immensely. (Are you going through a divorce?)

It’s best for Neptune in Libra to figure out what they want out of life. They should do this before trying to figure out how to achieve happiness. While helping others is fulfilling, it doesn’t always bring complete satisfaction. This may seem strange to them at first, but it’s true. They have to find what fulfills their wants and needs before they can find true enlightenment. (Read about Neptune Symbol Meanings).

This will probably be the most difficult decision Neptune in Libra will ever have to make. But, it’s also most important for them to lead a happy life. They need to turn their powers of justice inward. Then they can figure out what will balance the chaos going on inside their head and their heart.

They may have to give up something. It can be some of the time and effort they spend on other people’s problems, to gain something positive. Often they have trouble seeing what this kind of sacrifice can offer. But if they remain patient, they will forever reap the benefits.