Neptune In Aries Meaning: Higher Plane Of Being

What did it mean when Neptune was in Aries? These people are always ready for a war and will not take no for an answer. In other words, life can be short because the things you are focusing on will make your life move faster. Besides, every pain you face in life should make you act like a leader and deal with every sad moment appropriately. Equally, your presence does matter to many people because you have a certain role that you play in their lives.


Moreover, Neptune in Aries luck wants you to leave a legacy that will remind others of the struggles that you have been through. Also, life was not easy, but the further you have come shows that you are strong and brave. The hard times you have been facing did not change your attitude in going after your dreams. Equally, it is your purpose that keeps pushing you because it directs every step that you take.

Being the trailblazers they are, Aries isn’t afraid to jump first and ask questions later. This makes Neptune in Aries both brave and foolish at the same time. While their intuition is usually correct, their dream of achieving great things doesn’t always happen. And that’s difficult for them to understand.

Neptune symbolizes inspiration, illusion, spiritual enlightenment, and confusion. For Neptune in Aries, their creative spark is all that’s needed. And, they’re off like a bolt of lightning. They are ready to take on the world and will stop at nothing to convince others to follow them. Actually, your existence has a certain meaning because it brings the value of certain aspects in life.

This can cause them to deceive people sometimes, whether they do it consciously or not, while trying to bring people to their side. They feel their ideas or ways of doing things are correct and that if not done this instant will ruin something bigger. 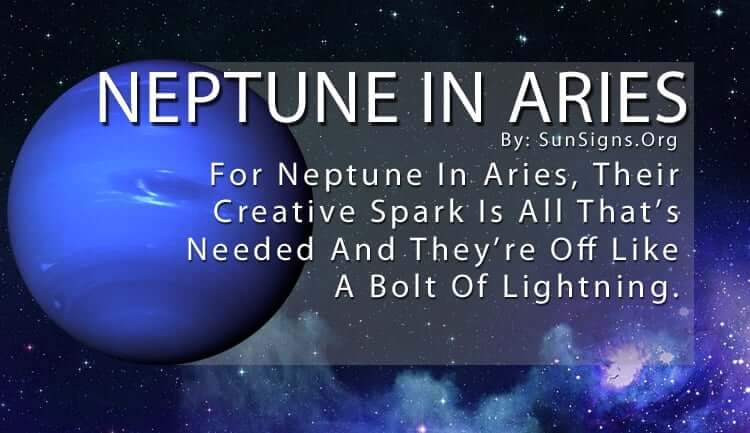 The Neptune in Aries people excel at coming up with a plan of attack, even if it’s done quicker than others would like. Besides, you have to be ready to embrace the fact that change will bring beautiful things into your life. Actually, you deserve not to suffer because you have sacrificed a lot in your life.

They don’t want to wait for anything to execute that plan. Some view them as radical, while others see them as visionaries. They can be both at times, but they always have the best of intentions at heart. (Also, find your warrior sign).

generally, Neptune in Aries women will never get scared because they are courageous enough to deal with certain issues. More so, you have to understand that every woman is created to accomplish a certain mission in life. On the other hand, Neptune in Aries man is positive because they want to create a positive family. Equally, you have to make peace within your spirit to overwhelm the entire family.

But if they can stay focused on their master plan, they can accomplish great things. The Aries Neptune sign wants to bring everything around them into a higher plane of being, including themselves. Actually, when you become the master planner, then everything will go as expected.

They will battle whatever is in their way to get there. They relish a challenge and love being in the middle of a fight, metaphorically speaking. Also, they are fiercely protective of their loved ones and will do anything to help them. (Take the sibling compatibility test).

Because of their impulsive nature, Neptune in Aries zodiac sign people sometimes misses the forest through the trees as they plow their way down the trail. While they may have some grand scheme in mind, there are usually some key details missing. It’s a good thing they think quickly on their feet, for that allows them to change course when necessary. Besides, how you respond to some things in life does matter a lot.

Is Neptune Aries Good or Bad?

But don’t try to tell them the best way to deal with the new situation, for they only believe in instinct for that. And those who try to get in their way will only get run down in the process. They can be skeptical about other people’s opinions because they have mastered their own and believe them to be the correct ones.

Sometimes the intense passion of Neptune in Aries woman or man gets in their way, making them their own worst enemy. It’s up to their friends and family to find a way to bring them back to reality once they get caught up in their frenzy. They can get so excited they lose sight of what’s going on around them. (Find your Neptune sign).

And their vision is a solid one, complete with why, when, where, and how all decided. That’s why they have trouble understanding why other people aren’t always so quick to follow them. They get so caught up in their world that they completely ignore others’ desires. They love showing off how committed and loyal they are. And if anyone questions their goals or methods, they will defend their ideas to the end.

The Neptune in Aries astrology shows that they are strong-willed and forceful when challenged. They will not let anyone can stand in the way of their dreams and goals. Once they have their destination figured out, they are determined to reach it. Equally, your goals will become your direction to the future that you desire. In other words, every goal has a role to play in your life.