The Neptune In Aquarius: Significance and Meaning

What does it mean when Neptune is in Aquarius? These people have a different way of tackling issues.

The Neptune In Aquarius: Personality

The Aquarius zodiac sign is known for being unconventional. So, Neptune in Aquarius can find inspiration wherever they go. Their creativity is endless and is only stifled when people insist on using conventional means to get things done. They work better by themselves as they have their way of doing things.

In astrology, Neptune represents inspiration, dreams, creation, illusion, spiritual enlightenment and self-awareness. (Click here to read about Neptune planet symbolism). This is why Neptune in Aquarius is always thinking of ways to better society. They tend to be dreamers when it comes to helping the world in general. Their goal is to right the wrongs of people who try to take advantage of the oppressed and fix the problems that others ignore.

It’s also a part of satisfying their enormous ego, which comes from being brilliant. Their minds are always working overtime, coming up with new ideas and theories to test. This is why they are also social beings.

They need trusted people they can brainstorm with and bounce their ideas off of to see if they would work. But they have to do the initial research on their own because their methods are seen as unusual to those who don’t know them well. 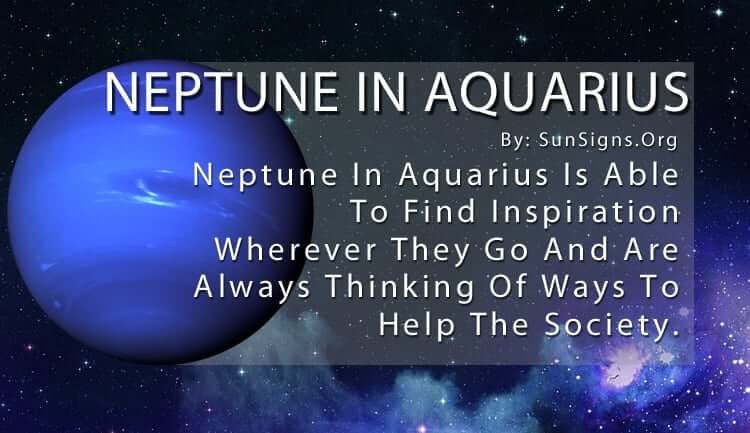 Positive Traits of the Neptune in Aquarius

Because of their interest in making the world a better place, Neptune in Aquarius are always looking for the next new gadget or practice to make things easier or more efficient. And when they don’t find the thing they are looking for, they attempt to create it.

It’s often the lack of machinery or programs to help in their life that inspires them to build something on their own. And when they have the best idea that suits their needs, that’s when they bring it to the attention of their network for a peer review. After this stage, they figure out a way to make it happen. (Find the most suitable career for your star sign).

Some people see Neptune in Aquarius as detached or aloof, but don’t let their poker face fool you. They are always thinking and creating in their mind. That is the only thing that brings them complete happiness. They feel true spiritual enlightenment when they come up with a ground-breaking project. They don’t show any emotion because they are an air sign.

Negative Traits of the Neptune in Aquarius

The Neptune in Aquarius sometimes meets resistance when they have a set plan that may not work for other people’s schedules. They rarely take other people into account for they can be a bit self-centered when it comes to their ideas.

Because it’s such a well-crafted theory, they expect people to fall in line with their plans. If they are to have a better success rate, they need to learn to respect other people’s time and restrictions. They can come off as disorganized or scatterbrained because no one knows what they’re doing except themselves.

The Neptune in Aquarius sign people only spend their time and energy on things they feel are worthy of their efforts. Mundane details of life don’t interest them. Their responsibility toward knowledge and improvement is much greater than trivial day-to-day activities. Rules and regulations mean nothing to them, except as things to break. (Read more about the Aquarius man).

Logic and reason are the backbones of their Neptune in Aquarius luck. So, they don’t register any emotion when inspiration hits. The only way to tell when they are excited about something is if they keep talking about the same idea with different people.