The beautiful symbol of this spirit bird sits atop many cedar wood totem poles, to this day, and speaks of the superior status of the tribe it belongs to. In many Northwestern Native American tribes, this spirit bird is known as the Skyamsen, and commands all of nature’s activity on the ground. Throughout the Native American culture the Thunderbird spirit guide is universally symbolic of profound power and glory, transformation, an indomitable spirit, indisputable authority, being a courier from another realm, provision, and divine dominion.

This Thunderbird animal totem also symbolizes creation and destruction, and divides the heavens from the earth. There are many differing accounts of what the Thunderbird meaning symbolizes, the messages it brings, and the level of importance associated with its presence. These differences can be attributed almost exclusively to the region and varying social aspects of the tribes who hold this animal symbol in such high regard. 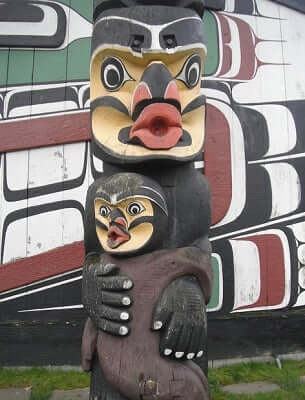 The Thunderbird animal totem is often viewed as an omen of warfare by some Native American tribes, who associate the sound of thunder with warring spirits in the sky. Thunder is often considered a sign of the impending victory of a particular group during ground warfare between conflicting Native American tribes. This was more so if that group consistently performed ritual ceremonies. This also included the traditional smoking of cedar wood pipes full of tobacco, which is considered sacred to the Thunderbird spirit animal, and war dances to pay homage to the spirits they revered.

Many Native American cultures believe that the smoke created from lighting and imbibing tobacco would lift their souls into the sky where they would encounter the spirit bird, and this encounter would solidify the warrior’s resolve and reputedly ensure a victory.

Thunder has long been associated with the symbol of this warring bird, the Thunderbird. The onset of war would often begin directly following a thunder storm, when ceremonial activities throughout the tribes would begin. Special huts, which were also made from wood collected from cedar trees, would be immediately constructed.

The choice of wood held a special significance to these tribes because the Thunderbird was said to roost primarily in cedar trees, and so they were considered as sacred as the Thunderbird itself. Native American tribes such as the Iroquois and the Shawnee would perform these war dances with purposeful precision in the hope of appeasing the provoked Thunderbird, and a guarantee that their tribe would be victorious in battle.

In contrast, other tribes that were unconcerned with warfare and battle, considered the Thunderbird spiritual totem as a symbolism of nature and the sun. These tribes illustrated the Thunderbird with the sun in place of its eyes, and believed that when the bird woke in the morning it would bring in the rising sun, and that when it closed its eyes at night, the sun would set.

Another Native American tale revolving around the spirit bird, Thunderbird spirit, told of lightning sparking out from its eyes and tremendous thunder that sounded from the flapping of its wings when it became angry. According to the legends, this spirit bird is to be paid the utmost amount of respect and satisfied at any cost.

The Thunderbird symbol is also regarded as the harbinger of life sustaining water. Elaborate rituals are prepared and enacted to ensure that local agriculture thrives and there is access to an uninterrupted food supply. During these ceremonies tribesman would create beautiful headdresses from the feathers of Eagles. They would come together and dance as the spirit bird who was always at war with a gargantuan water serpent. During these epic battles, in a gambit to protect humans from the water serpent, the Thunderbird would enter the water and defeat the serpent, which would spark turbulent rapids and devastating storms.

Many tribes believe the Thunderbird animal totem carries souls to the other side, accompanying the dead on this journey and providing strength and comfort. To symbolize this idea, many tribes create gorgeous masks in the image of the spirit bird and perform rituals wearing them. During these rituals, the masks would open up, epitomizing this spiritual journey of man and the Thunderbird in which the soul becomes one with the spirit bird.