The Snake animal totem, traveler of unseen ways through the tall grass, giver of enlightenment, and the coil of sexual fire at the base of the spine. Snake sheds her skin to change who she was, reinventing herself time and again throughout her life.

The snake spirit totem is the symbol of eternity, Oroboros biting her own tail, showing the continuation of the cycle from one stage to the next. When she coils upon herself she is the sacred spiral, tied to spiritual energy and healing throughout the world.

But the Snake spirit meaning is also reviled throughout the world, the Druids had the snakes that St. Patrick drove out of Ireland, the adder tattooed as a part of their order being the symbol referred to.

The snake was the tempter that gave enlightenment, disguised as an apple from the Tree of Knowledge in the garden of Eden. The term ‘snake in the grass’ is commonly used to refer to someone who is perceived as deceitful, or who is private about their true purpose or activities. 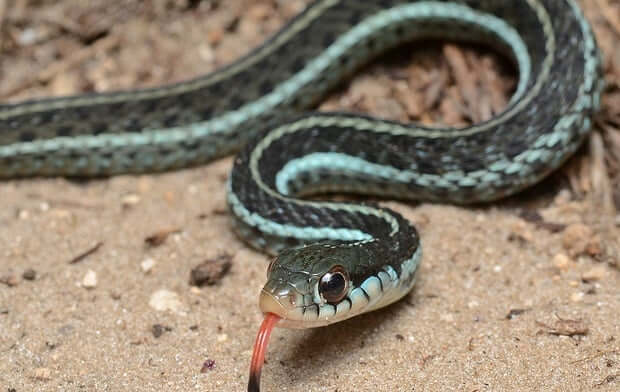 The Snake symbolism brings wisdom with her, teaching us that growth and development throughout our life happens in stages. Every so often we will find ourselves having grown through our life, from tip to tail of the snake’s path, until we are at the snake’s head.

In our mouth is the beginning of our next stage, and as we move forward we cast off the old skin of our past. We emerge, shiny and new in our skin, having shed off past habits, thoughts, and in some cases our very nature to become someone new. But we start the process again, growing from the thin starting point of our tail until we reach the head again, ready to start anew.

The Snake spiritual totem’s closeness to the earth is evident in their lack of legs, and their ability to disappear when motionless on the same. She teaches the wisdom of gaining energy and enlightenment from our environment. She does not generate her own heat, but draws it from the sun and the sun-warmed earth.

When the Snake symbol is in your life, wisdom is on its way. It is time for you to prepare for a transformation as she shows you the hidden ways of the earth. These secrets will lead to a transformation of mind and spirit, that will set you once again on the path of learning.

Share
Previous Dumped! 8 Surprising Reasons Why He Left You
Next Fairy Grimoire – Kobolds