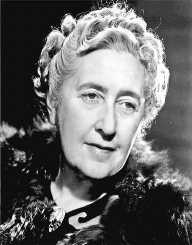 British crime novelist Agatha Christie was born on the 15 September 1890 in Torquay, Devon. Her mother Clara Boehme was the daughter of a British army officer and her father, Frederick Alvah Miller, was a New York stockbroker. Christis had two older siblings: Margaret and Louis.

Agatha Christie was initially homeschooled. She read at an early age and also showed interest in writing and music. After her father died in 1901, Christie attended Mussi Guyer’s Girls School in Torquay (1901-1905). She was then sent to France to finish her education at schools in Paris, returning to England in 1910.

It was 1916, during World War I, Agatha Christie wrote her first detective story. Her first novel was The Mysterious Affair at Styles (published in the USA in 1920 and the UK in 1921).

The Mysterious Affairs at Styles featured the detective Hercule Poirot who went on to highlight in over 30 of her crime novels as well as in dozens of her short stories. Christie’s other famous detective, Miss Jane Marple, first appeared in The Thirteen Problems (1927), a short story collection. There were 12 Miss Marple crime novels, and the character also featured in 20 of Christie’s short stories. Other books include The Mystery of the Blue Train (1928), Murder on the Orient Express (1934) and Appointment with Death (1938).

Agatha Christie went on to write over sixty novels as well as fourteen short story collections. She primarily wrote detective novels but also wrote a play and six romances. Her characters Hercule Poirot and Miss Marple went on to become two of the most famous detectives in English literature. Poirot is so renowned that the actor received an obituary in The New York Times in 1975. Many of her stories have been adapted for television

Her play, The Mousetrap, was completed in 1951 and this went to win a Guinness World Record for the longest continuously running production anywhere in the world.

Her last novel Sleeping Murder: Miss Marple’s Last Case was published in 1976 a few months after her death.

Agatha Christie helped establish the period known as the Golden Age of Detective Fiction which took place in the 1920s and 1930s.

Her home for many years Greenway Estate in Devon is run by the National Trust.

As one of the best-selling authors in history, Christie is remembered for her vivid portrayal of characters including Miss Marple and Poirot.

Agatha Christie was married twice. Her first husband as an army officer, Archibald Christie whom she married in December 1914. The couple had one child together, a daughter Rosalind before divorcing in 1928. She then married archaeologist Max Mallowan in September 1930, and the couple remained together until her death in 1976.

Agatha Christie is named in the Guinness Book of World Records as the best-selling novelist ever. Around four billion copies of her books have been sold. Her work also ranks highly in the list of world’s most-widely published books. Her novel And Then There Were None (1945) has sold over 100 million copies and is the world’s best-selling mystery novel.

In 1926 Christie’s mother died. The same year her husband Archie Christie left her for another woman. This resulted in the famous incident when she disappeared. After saying she was going to Yorkshire, she disappeared and was the subject of a nationwide search. She was discovered over a week later at the Swan Hydropathic Hotel in Harrogate, Yorkshire under an assumed name. Some reports say that she was suffering from amnesia, anxiety, and distress; others claim that it was a deliberate ploy to embarrass her husband.