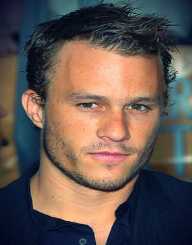 Heath Ledger is one of the most seasoned actors ever produced in the world. Despite the fact that his stay on earth was very brief, he made a lot of impact in the movie industry. Movie lovers would always remember him as one whose acting prowess is known all over. Heath made his debut in a television series, Roar before he later went ahead to prove his acting prowess in some other movies. His prowess and skills were noticed by juries of many awards which in turn felicitated him with many honors. Many critics often compare his performance with Marlon Brando and Al Pacino. Heath Ledger is always praised and hailed for being one of the greatest actors of all time. However, his determination and dedication to work are the main reason he could earn this accolade.

Heath Ledger was born in Perth, Australia, on the 4th day of April 1979 to Kim and Sally Ledger. His mother taught French while his Father is a car racer. He pursued his education at Mary’s Mount Primary School and Guildford Grammar School respectively. There, he played the role of Peter Pan in one of the school plays at a very tender age of ten. He, however, discontinued his education before he clocked 17. He accepted a role of a gay man in Sweat, a 1996 television series.

Having taken up the role in Sweat, fortune smiled on him in 1997 when Heath Ledger got two opportunities at his doorstep. He was given a role to act in Roar and Home and Away. His performance was very fantastic and received some review. However, his debut was in the Australian flick, Blackrock which was also released in 1997. His fame started rising as he performed excellently in his previous roles. He was then given a role to play in an American movie, 10 Things I Hate About You. He tried his best by portraying his role in a way that had a great significance to the plot. He also starred in another flick, Two Hands. He had a nomination for the Best Actor in this movie.

Ledger has started making waves in the movie industry. He later became a part of the Hollywood Icon and starred in The Patriot. Heath Ledger also became a part of the cast of monsters Ball in the same year. Between 2001 and 2003, he had starred in a series of movies and have been popular. He received a standing ovation for his roles in his three movies – The Brothers Grimm, Cassanova and Lords of Dogtown in 2005. He won a lot of nomination and became one of the most bankable actors in the movie world with his role in Brokeback Mountain. By 2006, released his movie, Candy which was based on Candy: A Novel of Love and Addiction. His role there earned him many awards. In the same year, he tried his hands on direction and directed as well as film a music video for a track in Cause an Effect.

Heath Ledger has done many works in which he was critically acclaimed as well as recognized. However, what could be considered to be his major work was his work in the 2008 flick, The Dark Knight. He acted as a Joker in that movie. The movie, however, became one of the top-grossing movies in the world. He also got a prestigious Academy Award for his role in the movie.

Heath Ledger was a very good Chess player while he was young. He was known to have won a Chess contest before he clocked 10. Apart from acting, he was known to have had affairs with many actresses. He was also known to have had a baby girl with Michelle Williams after he started seeing her during the filming of his film, Brokeback Mountain. The relationship was later split after it became sour. He, however, died in 2008 having taken an overdose of drugs. Some months later, his work, Dark Knight, which was considered as his best was released. He was then felicitated with the Award of the Academy Award for his role in The Dark Knight.