Mars in Libra people are moderate people who will have an amicable solution for all problems.

The Mars In Libra: Personality

Nothing is more important than justice to a Libra, and with Mars in Libra, they will fight tooth and nail to ensure justice is done. Balance and fairness are the cornerstones of the Libra personality. Maintaining it keeps them fulfilled. All they want is to live peacefully and harmoniously.

Because of this, Librans will take their time and weigh all their options carefully before making a decision. It’s this desire to do the right thing that drives them. So with Mars in Libra, their basic primal instinct is to defend themselves and others from all of the unfairness in the world. 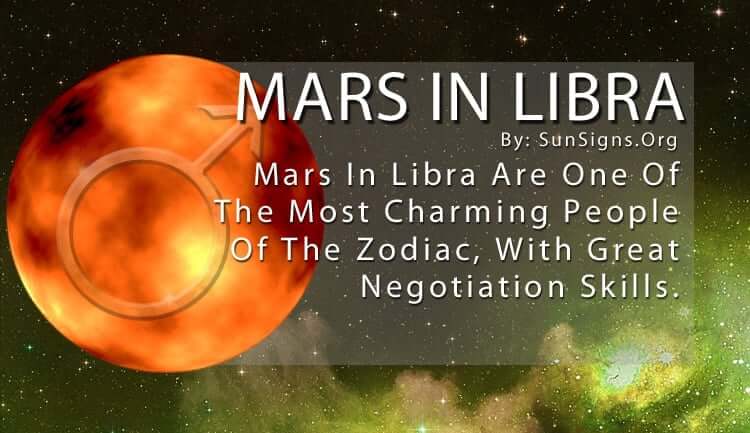 Positive Traits of the Mars in Libra

Mars is all about what motivates us to do something. Mars in Libra loves anything that involves solving and preventing any wrongdoing. And they want others to be on board with fighting the good fight. So they tend to try and ruffle people’s feathers to raise awareness of the injustice.

But if the situation is severe enough, the Libra Mars people will not only make up their minds. They will take action against the oppressors. Those who enter a profession such as law enforcement or the judicial system use their drive to make sure those who disobey the law or harm others are punished or put away to prevent further violations.

It’s in their nature to make sure good triumphs over evil so that the natural order of things is restored. And because they are keen observers of human nature, they often can anticipate problems before they arise. With this kind of knowledge in hand, they are then able to take the time to work out a solution to try and prevent the issue from ever happening.

This also comes in handy when dealing with their relationships. Because they always want things to be fair, they will do their best to treat their partner with the same respect they want for themselves.

Negative Traits of the Mars in Libra

Because Mars in Libra people hate creating controversy, they tend to be more passive-aggressive in their words and actions. They don’t want to appear too extreme one way or the other. And when someone offends them, they can employ underhanded practices to restore harmony. They don’t want to stir the pot any further than they have to.

Make sure you reciprocate the feelings and the effort, or else this Libra will be extremely disappointed. They expect others to care as much about maintaining balance as they do. This can cause conflict in and of itself. They work so hard to keep things equal between themselves and their soul mate that they tend to go overboard and become fussy over certain details that others don’t care about at all.

Understanding the Effects of Mars in Libra

Mars in Libra personality reflect on things before they can act. You are always inspired and motivated to bring out the best in yourself and the people you work with. Nothing holds you back from getting what you want because you do not give up easily.

Natal Mars in Libra brings good fortune to your life. With time, you realize your potential and start working hard to share your talents with the world. Mars influences your life in such a way that you become confident, brave, and bold, no matter the obstacles you encounter along the way.

What is the importance of Mars in Libra? With Mars in Libra sign, you see the best in yourself. With hard work, you reach your potential and work towards a positive influence in society. This placement enables you to embrace yourself for the person you are.

Mars in Libra men and women work hard to achieve their desires within a certain timeline. Progress in your life at your own pace but do not be too slow because the same might cost you lots of opportunities that you will never get back.

Procrastination is not good for your progress. You are good at doing this, and you need to change for the better if you want to achieve your goals within a short period of time. Mars in Libra luck manifests in your life only when you embrace positive energies and harbor positive thoughts. Always find things that drive your everyday activities.

Mars in Libra and Love

Mars in Libra compatibility becomes hard to determine because you are hard to read. You have various tastes in men and women and so pinpointing what makes you tick becomes hard. You enjoy being in the company of the opposite sex, but you are afraid of commitment.

Mars in Libra people negotiation skills are beyond compare. They tend to make great managers because of their strong conflict resolution techniques. And they are one of the most charming people in the zodiac, making you feel as if you are the only important person in the world.

Their willingness to try new things to figure out just the right formula for your home, personal, and love life, makes them a loyal partner indeed. And with Mars in Libra, they will do whatever is necessary to care for their close social circle and make them feel as loved as possible.