The Mars In Cancer: Significance and Meaning

The Mars in Cancer people can make their feelings and thoughts known without raising their voice.

The Mars In Cancer: Personality

People born under the Cancer star sign are ruled by their emotions. With Mars, in Cancer, they can get upset by the simplest offense. Mars represents our forceful nature and innermost desires. For Cancer that manifests as emotional manipulation. Rather than be upfront about what they want they’re more passive-aggressive.

While other zodiac signs are more fiery when they’re angry, that’s just not in Cancer’s nature. They don’t get furious or outraged. They are more likely to cry or throw a tantrum when they are truly mad. In fact, they try to stay away from disputes and chaotic encounters. They can’t stand being on the receiving end of someone else’s anger. 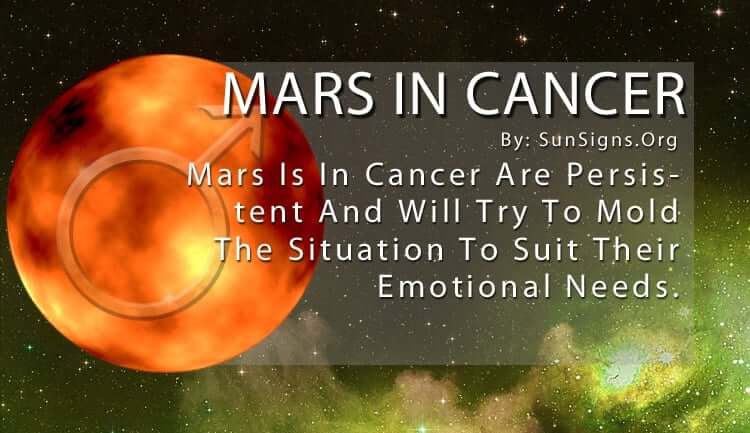 Positive Traits of the Mars in Cancer

When Mars is in Cancer, they will try to mold the situation to suit their emotional needs and make themselves feel better. This is where their persistent attitude comes from, for they will work tirelessly to maintain their comfortable existence.

The Cancer Mars person is like a mama bear protecting her cubs. This is where they are strongest when they are defending those closest to them. Some may see this as a weakness. But nothing gets a Cancer more fired up than insulting or hurting one of their own. And Mars in Cancer will do whatever it takes to make sure nothing happens to their friends, family or loved ones.

Negative Traits of the Mars in Cancer

Just like their symbol, the crab, the Mars in Cancer people will retreat into their shell until the coast is clear. They don’t handle change very well. So any upset in the balance of their comfortable lifestyle makes them defensive. And since they hate confrontation. They lose control of their feelings and thus themselves in the process. This makes them retreat until they feel secure enough to come back out and face the music.

The only time their nurturing nature can backfire is when Mars in Cancer tries to protect themselves from getting hurt. They tend to be overly sensitive and delicate when it comes to their own lives and their desires. They feel slighted when people don’t agree with their choices. They need constant reassurance that they are doing the right thing, and if they don’t get it, they become depressed.

Mars in Cancer feels this even deeper when it comes to their relationships. They throw themselves into the partnership and do anything to make their mate happy. And if that effort is not reciprocated to the same extent, they are devastated. This is especially true if they want a family and their partner doesn’t. Or if they have different expectations of how they should live their lives.

Because of their caring nature, Cancer’s strongest desire tends to lean toward becoming a parent. So those who aren’t interested should tell their Cancer partner immediately for it can change the course of the relationship.

And be cautious with your Mars in Cancer lover during sex as well, for they are rather fragile people. They don’t like to rush into anything. So take it slow and give them the space they need to feel out the situation. But once they do, you’ll have a devoted partner for life.