The Mars In Sagittarius: Significance and Meaning

The Mars in Sagittarius people love being at ten different places at the same time.

The Mars In Sagittarius: Personality

The instinctive drive in a Sagittarius stems from their naturally energetic approach to everything. When it comes to their basic desires, this is what gets them moving and keeps them in motion. And whenever Mars in Sagittarius gets upset, the need to focus on something else helps keep them sane.

That’s what Mars represents, that thing deep inside us that makes us tick or gets us all fired up. And for Mars in Sagittarius, they are all about having as many irons in the fire as they can. They get pumped up when they start a new project. They usually have too many new things going on at once. They are one of the busiest people you know because of their endless vitality. But you also know they are not completely happy unless they are going full-speed. 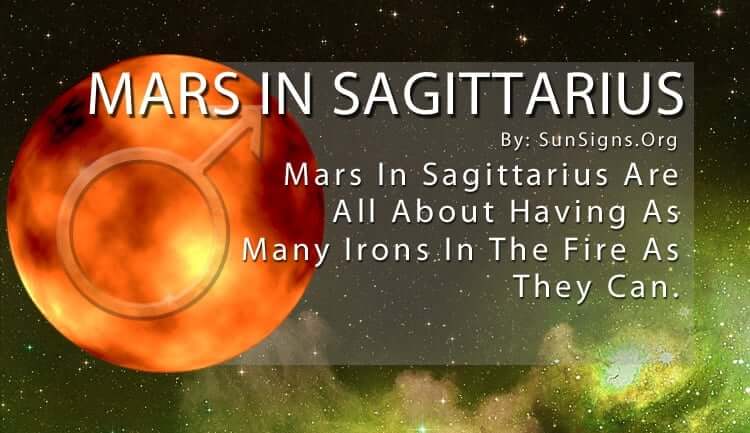 Positive Traits of the Mars in Sagittarius

As a fire sign in astrology, Mars in Sagittarius are incredibly passionate about all they do, meaning they can never do anything halfway. That’s why it’s important for Mars in Sagittarius to maintain a healthy amount of physical activity in their life, so they can handle whatever is thrown their way. Their incredible drive sometimes makes it difficult for them to keep it together, so burning off some steam is always a good thing.

The Sagittarius Mars people tend to be very knowledgeable people with a lot of experience. This is due to their frequent traveling and new experiences. And, they have great opinions on things. Wisdom is their strong suit. And, Mars in Sagittarius uses that wealth of information to get things done.

Negative Traits of the Mars in Sagittarius

But this doesn’t mean Mars in Sagittarius are particularly fierce or intense people. They are usually laid-back and easygoing. Even though they need to keep busy, they are also able to change course when necessary. They hate rigid rules or schedules and need plenty of independence to accomplish their goals.

They don’t do well when they have to answer to others. They are known to start projects with plenty of ambition but then switch gears to begin something else before finishing the last one. And while they may recognize this as a potential flaw, they don’t take criticism too well.

When people disagree with them, the Mars in Sagittarius feel annoyed or slighted. They try to persuade others to see their point of view, which may not be complete because of their lack of follow-through, But they don’t understand that when their beliefs get rejected.

This kind of disconnect can cause problems in the bedroom as well if Mars in Sagittarius isn’t careful. Their playful nature keeps things fun and exciting between the sheets. But, they tend to back off when things start to get serious. And if their partner wants something more than this Mars sign is not ready for, they could bail as quickly as they got into the relationship.

It’s not something they do consciously. They need their freedom to go where the wind takes them. They don’t take anything too seriously, including sex. They see it as more of a game than anything else, although they hate when people play hard to get.

They are direct about everything in their lives, and they expect others to be the same way with them. But while they may be selfish at times Mars in Sagittarius always mean well, and they certainly know how to keep things interesting!