How good or bad is the love compatibility between a Leo and Taurus emotionally, mentally and sexually? Read on…

The Leo and Taurus relationship can work very well together because of what they can give each other. Both of them love to have their egos stroked. At the same time, neither one is going to mind giving the other what they need. The Taurus man or Taurus woman requires a lot of love. They will need to feel that they are important to their partner.

The Leo zodiac sign enjoys hearing compliments and wants their partner to love and admire them. They are both very devoted to each other, but can also be clingy. Because their wants and needs tend to align, the Leo Aries in love find it easy to provide for each other.

In the Leo Aries love compatibility both the two zodiac signs enjoy high influence and material objects. They both highly value comforting and luxurious physical things. The Lion is often extravagant about giving their partner attentions and gifts. The Bull will adore this and will be easily won over by it. Taurus enjoys the very traditional courtship.

Leo and Taurus compatibility can work very well together. However, they can both be fairly stubborn at times which can cause arguments between the two. The lion and the bull will have to work hard to accept and tolerate each other.

At the same time, their relationship is made up of two Fixed signs. These two will want to dodge change as much as they can. Leo male or Leo female can have a lot of pride and Taurus male or female can be very stubborn. This will not be a relationship that will easily end.

Neither Leo nor Taurus in love will find it easy to admit they have made a mistake, even if the relationship is destructive. Their good love compatibility will not be able to stop them from having a long and painful Leo Taurus breakup if it comes to that.

The lion and the bull might look like they are made for each other. However, when the Leo is dating Taurus, both can be forceful. They will both think their way is the right way and they will want their way. They will pout and try to manipulate others until they get their way. In they Leo Taurus friendship both will not be likely to give in until they are satisfied.

When Leo star sign and Taurus zodiac sign fight, their fights are not likely to end quickly. If one of them finally decides to compromise with the other, the other might not agree because they prefer to hold a grudge. Leo and Taurus couples will be likely to bring up points from one argument in future fights they might have. 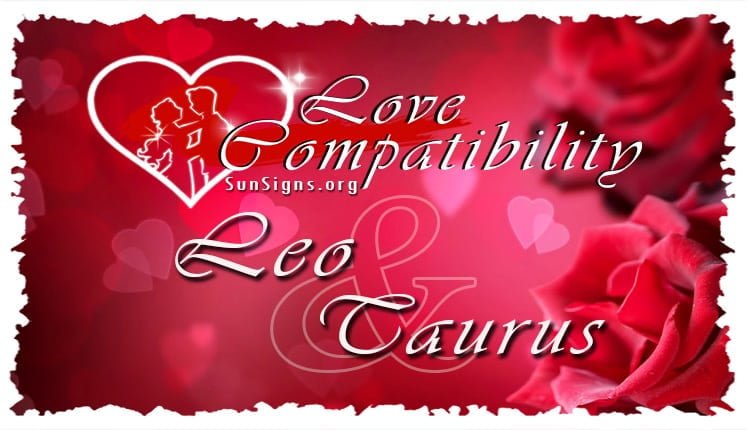 The sun rules over Leo sun sign. The planet Venus rules over Taurus. The sun is about self, while Venus is about love and to some degree, money. The sun is bright and gives off heat. Like the sun that rules them, Leo will give off energy and excitement. Venus will relate to love, elegance and indulgence.

These two zodiac signs have both male and female energy together. Because of this, they will be able to give each other a lot of admiration. They will both be able to help maintain each other’s balance. The planet Venus is always within 48 degrees of the sun, so these two will naturally be comfortable close together. The sun symbolizes life and Venus symbolizes love. If Leo and Taurus in love understand each other, their connection will be a positive one.

The best thing about Leo and Taurus compatibility is the level of admiration they have for each other. They both have dynamic personalities and they both like to be in control. However, neither will be able to dominate the other, though they might try. They will work at achieving their goals together.

A Leo man or Leo woman will always be like royalty. A Taurus man or woman will always enjoy the good things in life. These zodiac personality traits seem to make them a good couple. These two sun signs have a relationship that is happy, extravagant and affectionate. Taurus will definitely take notice of the lion’s generosity.

In the Leo Taurus love compatibility both can be very demanding and they have high expectations from their partner. Leo requires a lot of adoration from their partner. Taurus requires a certain lifestyle. They will both enjoy a sophisticated life together, but they could also be a good couple rooted in convenience. Their relationship runs deeper than that. Leo and Taurus marriage can have an electric connection when things are going well. Taurus’ sexy side attracts Leo. Leo is able to make Taurus feel very special.

The sun ruling Leo birthdays represents life. Venus ruling Taurus represents love. These two zodiac signs have a good start to their love compatibility together. The success of their relationship will be somewhat based on their common love of sophistication and comfort. However, the success will be more based on their devotion and trustworthy nature of each other.

Leo is a Fire sign and Taurus is an Earth sign. Both of these star signs are motivated, but in different ways. The lion wants money and influence. The bull wants their life and their love to be stable and secure. Both Leo and Taurus soulmates will want to control the relationship. Because of this, they might end up in a power struggle. The bull in this Taurus compatibility is not likely to give in during an argument. They see moves like that as surrendering to a dominant partner.

However, they are more likely to give in if they can see that it is the most rational thing to do. When the Leo and Taurus couple fight, it can be feisty and legendary. When they both see that the relationship is important to both them and their partner, they will be less likely to argue.

Leo and Taurus birthdays are both Fixed signs. This means they are both fixed in their opinions and not likely to change their minds. Both Leo and Taurus are capable of changing their minds, but it will take a lot for them to do so. Because of this, their disagreements can be very intense. They will both believe they are right and that their way is the only way.

Neither the lion nor the bull in the Leo and Taurus love compatibility are going to be comfortable with things changing. Once they have something the way they like it, they will want to leave it that way. They will not want to change it even if it means that change would make it better. When either one is completely devoted to the other, they will be unlikely to decide the relationship needs to end. Because of this the relationship can be very stable. However, it can be a bad thing if the relationship is negative in some way especially when it comes to the Leo Taurus sexuality.

Taurus is an earth sign. Leo is a fire sign. It is important to realize that fire can burn the earth. Leo star sign has a fiery intensity and will be emotionally demanding. Taurus sun sign wants a quiet life and might feel Leo is asking too much of them. At the same time, earth can smother fire. If the bull is controlling, they might smother the lion’s excitement.

Leo will not want to tolerate this. It can be difficult for these two to balance each other out because of their strong personalities. Leo and Taurus compatibility will be successful if they work together and compromise to keep from fighting for control. Any fights these two have for control will not be settled in a way that will leave either one content.

A romantic relationship can be a good connection for Leo and Taurus compatibility. They can be happy together if Taurus remembers who is in control. Leo will need to remember to give the bull the sexy indulgence they need.