How good or bad is the love compatibility between a Leo and Capricorn emotionally, mentally and sexually? Read on…

There is hardly a couple that is more supportive than a Leo and Capricorn in love. These two are likely to have a relationship based off traditional values. These two will be attracted to each other because of their similarities. And they will use their differences to balance each other out in this Leo Capricorn compatibility.

The Leo dating a Capricorn are likely to go on many romantic dates. This is a couple that is more likely to last for months or years, rather than just being a casual hookup. However, these Leo Capricorn soul mates will need to both put some effort into the relationship if it is to work out well, just as they would even if they were with another sign.

The Leo personality is a rather social sign. They are great at making friends and pleasing their bosses. Leo has high goals for him or herself, and there is little that can get in their way when they have their mind set on something. The same thing goes for when they are romantically interested in someone. They are likely to try to get their attention and shower them in compliments to earn their desire.

Once in a relationship, the Leo man or Leo woman tends to be romantic. They are one to wine and dine their romantic partner, but they wouldn’t turn down a simple one-night stand if it was with someone attractive enough. When they are in a serious relationship they will want to be in control of their relationship, making most of the major decisions. Many zodiac signs are turned off by this trait, but others find comfort and stability in it.

When Capricorn born is looking for a romantic partner they will want to be with someone who can keep them entertained, but they will also want a stable relationship. Leo is likely to be able to entertain this sign in the beginning of their relationship, in fact, that it probably how they will first attract this sign.

The Capricorn man or Capricorn woman loves who they are, and they wouldn’t change their personality for anyone, even their romantic partner. They need to be with someone who can accept them just the way that they are, or else things will not work out well for their relationship

Unlike Leo, Capricorn personality isn’t into casual sex, at least most Capricorn men and women are not. They will want to be in love, or at least in a serious relationship before they have sex with their partner. Capricorn are usually people with traditional values, and they will want their partner to be able to share their values. This might be a hindrance to the Leo and Capricorn in bed. 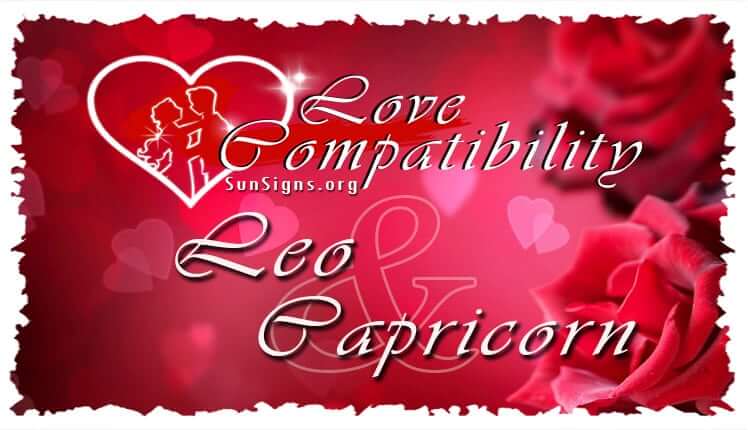 These signs do have some conflicting traits, but there are still some pros to the  Leo and Capricorn love compatibility.

Leo sun sign is great at communicating with others, even with people who they are attracted to, though many other signs find that task to be difficult. Leo is likely to be the one that first approaches Capricorn, and not the other way around. The Lion is a flirt, and is likely to try to flatter the Sea Goat right off of the bat. Leo will love talking to Capricorn about all sorts of creative ideas that may not make sense to others.

The Capricorn star sign is likely to be entertained by this conversation, even if Leo’s ideas don’t make sense to them either. As these two keep talking they will realize that they are both hard workers who are willing to work for what they want in life. Everything they have they have gotten because they have earned it through hard work and perseverance, and not through half-hearted work and poor attitudes. In this Leo Capricorn compatibility, they will find this trait attractive in each other, as they like others with the same work-ethic as they have. This will be a great basis for future conversations.

The Leo Capricorn soulmates are also more likely to support each other in their work endeavors because they both understand what it is like to have a goal that requires a lot of effort to accomplish. Their conversations will have to be meaningful if Leo expects Capricorn to fall for him or her. Capricorn is a sign that will thoroughly examine a potential partner before getting into a relationship with them. Leo will have to seem genuine to gain Capricorn’s trust and affection.

If you are a Leo trying to catch the fancy of a Capricorn then it is best to be honest in your attempt, as Capricorn has no interest in liars and fakes. If Capricorn decides that Leo, is in fact, good enough for them, then their relationship will commence.

After the strict analysis that Capricorn goes through they are ready for some fun once the relationship finally starts. Leo can relax finally, as they are usually great at planning romantic dates. Once the tough part of the relationship is over these two will start to have some fun together which could even lead to a Leo Capricorn marriage.

As it is already easy to see, the Leo Capricorn friendship can be complicated at first. Let’s look at some of the cons of the Leo and Capricorn love compatibility.

Leo is usually a flirtatious sign, and flirting is their normal way of attracting another person to them, When this attempt does not work, Leo may become disinterested. It is simply harder to attract a Capricorn sexually than many of the other star signs. Unless there is something special about this particular Capricorn, it is likely that the Leo male or Leo female will quit on this relationship before it even beings.

To put it simply, it is hard to start a relationship between a Leo and a Capricorn, even on the best of days. Unless these two think that each other are extraordinary, then it is likely that these two will only be friends. Unless Leo is persistent, or Capricorn is especially attracted to Leo, this won’t work out, or will take a while to start. If these two get together they will be able to appreciate their similarities, but they will start to notice that they have many differences as well.

Both these zodiac signs are hard workers as well, which is one thing that they can admire in each other, but it is another thing that can separate them from each other. They are both likely to spend much of their time at work, working on their hobbies, or socializing with their separate groups of friends. At the end of the day, they simply won’t have much time left to spend with each other.

Lack of time together can easily fray the relationship between any two signs, and the Leo and Capricorn compatibility is no exception to this rule. When these two do spend time together outside of the house it is likely that Leo will act rather possessive towards Capricorn, which will make Capricorn feel uncomfortable and crowded. They need room to breathe. Besides, if Capricorn were possessive towards Leo there is no way that it would work out, as Leo likes to be in charge of things, not held close an commanded.

While things may be great between these two in the bedroom at first, eventually their flickering relationship will get in the way of that, and make the experience less thrilling for the both of them. The sexual relationship between a Leo and a Capricorn is a hard one to start, a hard one to maintain, and one that will break up slowly and leave hard feelings.

In conclusion, it doesn’t seem that a romantic relationship with good Leo and Capricorn compatibility is worthwhile astrologically. These two will work well as friends though and will be able to support each other in their careers and hobbies. They just don’t have enough in common to click as a romantic couple. It is best to be wary when trying to start a relationship with a Leo if you are a Capricorn and vise versa.