How good or bad is the love compatibility between a Leo and Libra emotionally, mentally and sexually? Read on…

The Leo and Libra compatibility is that of a harmonious couple. Leo is a driving sign, full of new ideas and dreams. Libra is an intelligent and creative sign who will work for their dreams.

These two star signs have many things in common that can help to attract them to each other. And the differences between them can help to balance each other out, rather than breaking them up as long as they put effort into their relationship. Once the Leo and Libra in love get to know each other on a deep level they will begin to understand what it is like to the their partner’s sign, and they will be able to support them better because of it.

Leo sun sign is a strong and determined sign. The Leo sign is made up of independent people who know what they want in life. And they will do whatever they need to in order to get it. They look around their world for things that can help them to advance. They are hard workers, but only for the sake of one day getting promoted and being the boss. They also make it a point to talk to people who will get them ahead.

Because the Leo man or Leo woman sticks to their goals so firmly others might see them as being stubborn and egotistical. It is true that the Lion often has a large ego and can be seen as narcissistic because of their high self-confidence levels, but this trait is only one of many that help to lead them to success. While they act full of themselves while they are with friends, they can still have their feelings hurt, which can put them in a poor mood for days afterwards.

Libra star sign is an optimistic sign that can be full of life. Their positive demeanor helps to make the friends wherever they go. Some Libra men and women are great at socializing and making friends. This can help them to advance them in their career if they chose to have one, which most Librans do. They will want to have some sort of independence in their job, but not too much. When unsupervised a Libra can become a procrastinating slacker.

Like Leo, Libra also has self-esteem to spare. Also like Leo, other people may see this as a negative trait and think that they are letting their ego get the better of them. One negative trait about the Libra personality is that they are often indecisive when it comes to just about any decision, big or small. Even though Libra wants to be independent, they are aware that they need someone to guide them and encourage them if they are to become successful. 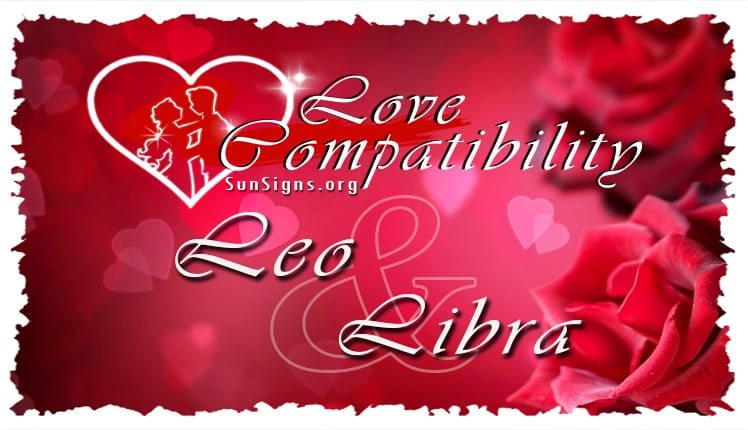 The Leo and Libra love compatibility has many traits in common that can help to bring them together and their differences can help to balance each other out. Let’s look at some of the pros between a Leo and Libra in love in a romantic relationship together.

It is likely that it will be Leo that first attracts Libra. Leo are more social and determined, and both these traits will make it easier for them for approach someone who they are attracted to. These two astrology signs are both rather intelligent, and this will be one of the factors that help to spur their conversations on a Leo Libra date.

In a Leo Libra relationship, both these signs want to be with someone with a firm knowledge base, so they both see intelligence as an attractive quality in each other. As these two start talking more they will make friends with each other quickly, and this friendship can easily turn into something more romantic or sexual.

Neither the Leo and Libra in bed are afraid of having sex soon after meeting. Both these signs will also do their best to please each other. Although Leo is more likely to try to be dominant while engaging in sex, no matter what their gender is. These two love spending time together, but they also know that spending time with their friends are also important.

The Leo Libra soul mates is likely to go on double dates and other activities of this kind. Being together only expands their social circle, while when they are with other horoscope signs their friendships could shrivel. These two signs both love getting out and trying new and adventurous things. They have no problem with adding friends into their adventures or they can also go it alone with only each other. Both ways are pleasing to this Leo and Libra compatibility.

These zodiac signs also love to bounce ideas off of each other. Libra is more likely to have creative ideas for hobbies, while Leo is more likely to have progressive ideas for their career. No matter what the topic, so long as the idea is a good one, this Leo Libra couple will support each other on it. This couple knows what it is like to have a goal that they are truly inspired to reach, so they will do whatever they can to support and encourage each other.

Also, in a Libra Leo marriage, these two love listening to what each other have to say. There is hardly a dull moment between this couple, even if they are just sitting around chatting and sipping coffee together.

As great as this Leo Libra partnership seems, like any couple, this one has some downs to match their ups. Let’s look at the cons of the Leo Libra love compatibility.

At times Leo male or Leo female tends to get busy at work or with their social circle, and they may not have as much time to spend with his or her romantic partner as they would like to. This can cause some problems within the Leo Libra marriage compatibility. While the Libran does not need all of Leo’s attention, they would like it some of the time. Like anyone, Libra loves a compliment and some attention now and again. Sometimes Leo forgets to give the right amount of attention to their partner. This can make Libra feel unloved and they may act coldly towards their lover in the future.

At the same time, Leo born also needs attention to feel at their best. Sometimes Libra can easily overlook this as well even though they often get the same feeling.  It is a little silly, really. Both of these signs crave attention from each other, but they can both forget to give attention to each other. If these signs are to make each other happy they need to remember to make time for their partner and treat them like they want to be treated.

Leo and Libra in love have many similarities that they can sometimes overlook, and this is just one of them. Once the relationship between these two signs start to get serious they may want to both have control over the relationship. This sounds reasonable, but not to Leo.

Leo often wants all of the control within the Leo Libra friendship. Libra won’t want to have this. While they are not a completely independent sign, they don’t want their lives to be controlled by their romantic partner. Obviously there needs to some sort of compromise between these two. This can be remedied if Libra man or Libra woman is allowed to have their opinion imputed into the major decisions in the relationship, but while allowing Leo to have most of the power in the relationship.

Leo knows that this is the least that Libra will settle for, and sometimes Leo will manipulate their Libra partner to get this result. The lions will also get upset when Libra spends their money on frivolous things, even when they are the ones making the money. Financial issues can be a big reason for the Leo Libra breakup.

Overall, the Leo and Libra compatibility has its ups and downs, but so does every other relationship. This couple will work well together if they can stick to their strengths. Also, they need to learn to respect each other and value each other’s opinions if they are to make things work. However, there will rarely be a slow or boring moment in a Leo Libra relationship. This relationship is predicted to be an exciting and enduring one if these signs can learn to work together.