You are a Taurus if you were born between April 20th and May 20th. The Taurus woman personality is independent and emotionally strong. She is loyal to her friends and family. The Taurus woman wants to do this on her own. If others offer to help her, she won’t turn it away, but she won’t ask for help.

Taurus women look for friends who have personalities close to their own. The Taureans are also closer to members of their families with similar personality traits. These kinds of people are just easier for the Taurus woman to get along with.

Also, when another person has a similar personality, the Taurus woman characteristics shows she feels like that person can more easily understand her feelings and motives. 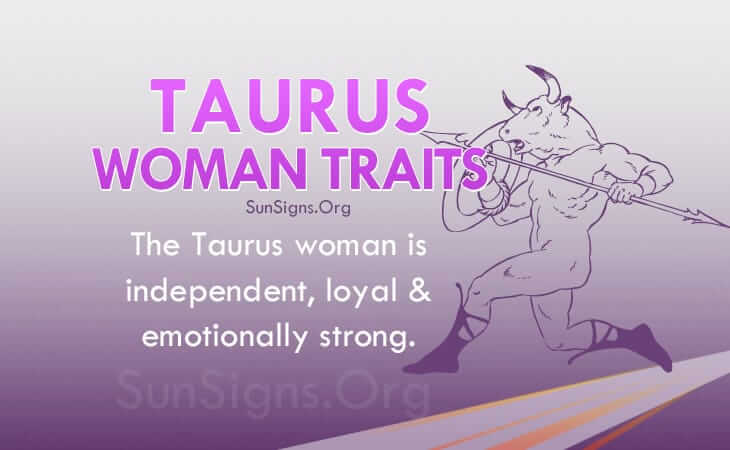 The Taurus woman traits show she is good at keeping her emotions in check most of the time. In a majority of situations, the Taurus lady seems to be glowing with a sense of friendliness and generosity.

It is rare that a Taurus woman will become angry and upset, and when they do get like this they are not prone to letting it show. Taurus girl would like to help out their friends when they are not feeling well, but they would rather handle her own problems on her own time.

The Taurus woman personality traits show she doesn’t go around looking for sympathy from others. She knows that she is strong and can take care of it. Besides, she does not like worrying her friends and family.

The Bull female would rather assign projects to herself rather than working on a project with a group. This helps to make the Taurus feel more independent and in control of her own life. She may have some hobbies that she likes to work on by herself, like gardening or blogging.

The Taurus woman traits show she usually has a flair for the artistic. Whether it be painting or music, the Taurus woman will usually take pleasure in it. The Taurus female will be the happiest when she is working on an art project, enjoying another hobby, or when she is simply surrounded by beautiful things.

The Taurus woman characteristics show she is especially loyal and caring towards her family and close friends. She will do whatever she can to help them if they are in trouble.

Stress can have a large impact on a Taurus woman’s life. This is one of the things that Taurus woman like to deal with on their own, but when they become too stressed they will accidentally lash out at friends and family. They feel bad about this since they are aware that this personality trait can push others away.

The Taurus woman personality traits show she tries to keep this emotion inside as well as they can. To reduce their chances of becoming too stressed out the Taurus woman tries to avoid jobs or hobbies that come with a large need for responsibility.

The Taurus lady would rather be in the background, following simple orders, than being in the front of the room giving the orders. This just helps to keep the Taurus female’s life easier.

She’s not one to just hook-up with strangers. She will be protective of her partner, which can be annoying at times, but in the end she really just loves her partner.

Once in love she will be even kinder than she was before. Love really does bring out the best in some people, especially the Taurus woman.