You are a Taurus if your birthday is between April 21st to May 21st. A Taurus man’s traits is synonymous with the determined man. A Taurean will always finish what he sets out to do. If he fails he won’t sit around and moan about it, instead he will get right back up and try again.

The Taurus man characteristics show that there’s not much that can keep a Taurus male down. Since a Taurus is so focused on getting his goals down he will take things slowly to make sure that he is doing everything right.

From a glance it may seem like this Taurus man personality is working too slowly towards their goal. But in time the Taurus man will have completed his goal when many other zodiac signs would have dropped and picked up several goals that they haven’t completed.

The Taurus man personality traits show that once he has his sights set on something he will keep on it. This may seem like just a stubborn male trait to outsiders, but a Taurus man won’t care if he is stuck in his ways so long as his ways bring him success in all the challenges he takes. In most cases, the good Taurus man traits help him to accomplish his goals. 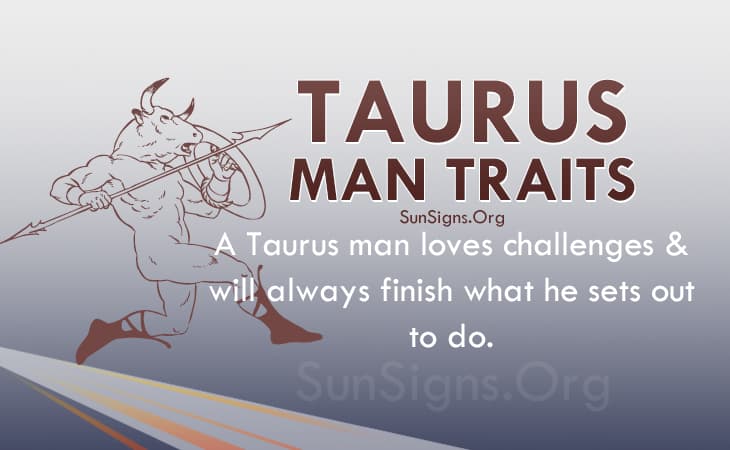 The Taurus man characteristics show that he loves to be outside and to be active. Taurus is an Earth sign. So the Taurus guy will likely feel most at home when he is outside in nature. The Taurus man will likely take pleasure in camping, hiking, swimming, and other activities of that sort.

Speaking of the outdoors, the Taurus man doesn’t mind getting his hands dirty if it means getting something done. The Taurus man may also take pleasure in hunting or fishing since they bring a form of satisfaction, like the meat they get is a prize for his hard work.

On the other hand, the Taurus man also enjoys the finer things in life. He will like having extravagant dates or going on exotic vacations, so long as he doesn’t have to work while on a trip.

Since the Taurus man works so hard he deserves a break every once in a while, and he is likely to take these breaks with his friend or romantic partner. This can make his partner’s live exciting as well.

Overall, a Taurean will feel better when he is working for something rather than relaxing and not doing something. When he earns money he is likely to spend it on objects that he will cherish.

Although, when the Taurus man is shopping for a new gadget he will try to get a good deal. While he sometimes enjoys the finer things in life, he will not want to pay a “finer things” price for it.

When looking for a partner, the man belonging to the sign of the Bull will take a more traditional approach. While the Taurus man wouldn’t turn down a simple fling, he would rather have to work on impressing his partner and gaining their respect.

A Taurus personality will work as hard as he needs to in order to impress his partner. Overall, he will want to be with someone whom he can have a loving relationship as well as raise a family with. Having a loving family will give the Taurus man a type of satisfaction that he cannot find anywhere else.