The frog spirit animal is the perfect symbol of the life cycle. Each one goes through enormous transitions in each of its stages, symbolizing that humans must do this, as well. We go through physical transformations at various points in our life. But we must remember to evolve in our mental states, too.

Sometimes we must make dramatic changes, just like the frog does. The frog’s transformative journey takes it into adulthood. To us, it symbolizes reaching the desirable state of enlightenment and contentment. Our journey is not complete without growing pains, and it’s best to accept and embrace this beforehand. Like the frog animal totem, we can take each struggle as an opportunity to learn. Frogs as spirit guides can also teach us lessons in fortune, renewal, reproduction, and purity.

The Symbolism of the Frog Based on Cultures

A range of cultures accepts the frog for differing spiritual symbols, although many of them agree that a frog is symbolic of fertility due to the large number of eggs that females lay. Ancient Egyptians recognized the goddess of fertility, Heket, as donning the head of a frog. Celtic symbolism associated the frog with healing and cleansing because it is always popping out after the rain.

In both China and Japan, the frog is thought to bring good luck to journeys and childbearing. By contrast, ancient Hindus viewed this amphibian as a signal of darkness.

In the Bible, frog symbolism is found in two instances. In both cases, the same was not positive. All the occurrences of frogs in the Bible are in a negative light. The first spiritual meaning of frogs came like a plague upon Egypt. God sent the plague of frogs to Egypt because Pharaoh had refused to let the Israelites free.

Dead frogs, later on, symbolized the stoppage of the plague. Pharaoh asked Moses to pray to God so that He can stop the plague. The Plague stopped, but Pharaoh was still adamant about letting the Israelites go.

The second frog symbolism is found in the book of Revelation. John the Revelator saw three evil spirits in the form of frogs coming out of the false prophet’s, and the dragon’s mouth. The idea of such symbolism came from the belief that frogs were untidy and slimy.

Medieval Christians believed that land frogs were a sign of righteous congregations while water frogs symbolized the sinful congregations. 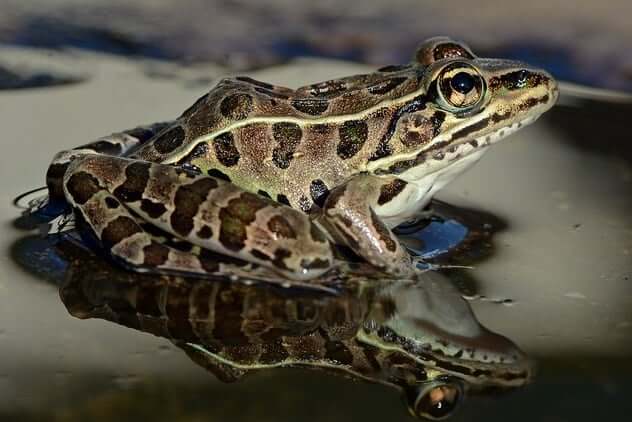 When the frog jumps into your life, it is an indication that your future will be full of opportunities. It will be a time of change and transition. Besides, the frog is there to help you keep swimming through some of life’s tough periods. Frogs want us to enhance and deepen our power of intuition to strengthen our connection with the spirit world. It is an empowering creature, regardless of its small size, and places a high value on personal power. As a totem for travelers, the frog offers reassurance and moral support during journeys and adventures.

If the frog is your animal totem, you must be a great listener and advice giver. Your family is important to you, and you will do anything you can to help one of them. Throughout life, you have maintained close and meaningful relationships with your family members. And the frog reminds us to keep up this pattern throughout the rest of our lives.

Above all, you have the uncanny ability to relate to others on a profound and personal level and always know exactly what to say. Frog people have true empathy towards all others. Furthermore, they will always do their best to assist those who are hurting in the healing process.

You may do this by enabling them to release their negative energy onto you to help them cleanse themselves and start fresh. In this way, the frog symbolism shows us that it can bear a lot more than we would expect.

The characteristic leaping of a frog meaning in your dreams may suggest your lack of commitment. Rather than sticking to something, the frog prompts you to notice that you are jumping from one thing to another.

The frog totem has the ability to live on both land and water. This is considered a mystery that its creator can only answer. Those who have the frog as a totem are inclined to walk between planes, whether physical, emotional, or spiritual. Such people love playing around with the magic of nature and life.

The frog is mostly active in the night rather than in the day. This trait inclines people to use the frog in arts of the dark and witchcraft. Frog totem is mostly used in the mysteries of life that we cannot understand as humans. It is also related to the unknown occurrences in life.

Native American Symbolism of the Frog

Native Americans believe in the power that many animals hold, including the frog. The frog is seen as a rainmaker because of its affinity to water. The frog spends most of its lifetime in the water rather than on land. Native Americans also believe that the frog controls weather patterns.

People that associate with the frog spirit animal have an affinity to being great and possessing psychic abilities that make them better. The frog signifies a symbol of transformation because of its ability to live comfortably in two environments. Soon you will experience positive changes in your life, and you should be able to embrace them.

What do frogs symbolize in dreams? To find out, keep reading. If you are trying to catch a frog in your vision, your life is in the process of changing rapidly. You may be trying to prevent this. Don’t be afraid of change. Embrace it, try it out, and move on to the next if it doesn’t work out. It is not to say that you should expose yourself to misuse without making a stand for yourself.

You may swallow a frog in your dreams. When this happens, know that you are holding back something that you need to say. There is something that prevents you from expressing yourself openly and honestly, and you must figure out what it is to move forward.

You mustn’t hold yourself back from the truth, but be mindful of exercising tact and consideration when you express your feelings. Don’t let negative emotions take control.

Frog meaning signifies life cycles. It most significantly stresses the importance of rebirth. The frog’s journey through life reminds us of the many cycles of transformation we go through to become better. We are reborn a couple of times because we are always trying to figure out our life purpose and soul mission.