What is the meaning and significance of the Maya God and Goddess symbol? Ixchel was a notable Mayan goddess whose role in faith was sometimes vague and/or confusing. However, most have accepted her as a feminine goddess of fertility and healing because of her name: “ix” meaning goddess of the feminine, and “chel” meaning light or rainbow. Thus, she is often referred to as the Lady/Goddess of the Rainbow and Lady of the Sacred Light.

As a feminine and maternal goddess, the Ixchel symbolism was also associated with all bodies of water, from small creeks and streams to large lakes and seas – fitting, as these were places where one would be most likely to see a rainbow. As the goddess of water and divination, the rainbow offered itself as the perfect symbol of Ixchel.

By gazing at it, the Mayans believed that they were invoking her infinite wisdom and allowing themselves to travel through the gateway to the divine. Additionally, her roles in Mayan culture included female warriors, goddess of midwifery, and healer. However, we will focus on three of her main roles and their respective symbols: moon goddess, mother, and crone.

What do Maya God and Goddess symbols mean spiritually? In the fast-changing society and the buzz of life, it is important to embrace wisdom to be on the winning edge all the time. No one was born wise, but it is a skill to learn, develop and use to boost our lives. So try to find more ways to advance your wisdom, like trying new things and reflecting on the process to gain wisdom.

The Maya God and Goddess symbol meaning signify that it would be excellent to keep praying to God for resounding wisdom to see through any darkness or confusion. Thus you need to still more active spiritually to access divine wisdom and thrive effectively in life. Also, keep analyzing your experiences and test your skills to become wiser and wiser.

The Maya God and Goddess symbol biblical meaning indicate that you gain deeper wisdom by walking with God. The scriptures say that you will be full of wisdom if your fear the Lord. So you need to honor and esteem God with all your heart, and His wisdom becomes your wisdom.

The symbolic significance of Maya God and Goddess implies that it would be awesome if you keep an open mind and try new things instead of doing the same things the same way. Indeed you gain wisdom as you expose yourself or put yourself out there, tap new opportunities and learn new things. Let your mistakes be your lessons as you move forward.

If you keep seeing Maya God and Goddess symbol everywhere, it would be great to enhance your social intelligence by meeting with and talking to strangers. Interact with guys from different backgrounds to get unique perspectives and broadening your ideas base. Also, try to think more creatively to reignite your cognitive functioning.

The Maya God and Goddess symbol dream meaning indicate that it would be great to understand your key strengths and use them to better your life. Again look for ways to close on your weak areas. Do not be afraid to take risks or making mistakes. You will learn faster and more effectively as you keep trying.

Facts about May God and Goddess

The meaning of the Maya God and Goddess symbol tells you to surround yourself with wise guys and share your wisdom with them as you learn some skills to boost your wisdom. Lead by example by being more open, fair, and thoughtful all the time. Please do your best to help others who have sought your advice and show them the right direction.

Embrace wisdom by anticipating imminent change and reduce adverse effects in your life. You need to learn and understand the facts before you make decisions. Again it would help if you tapped into your intuitive wisdom to resolve some of your complex life issues. 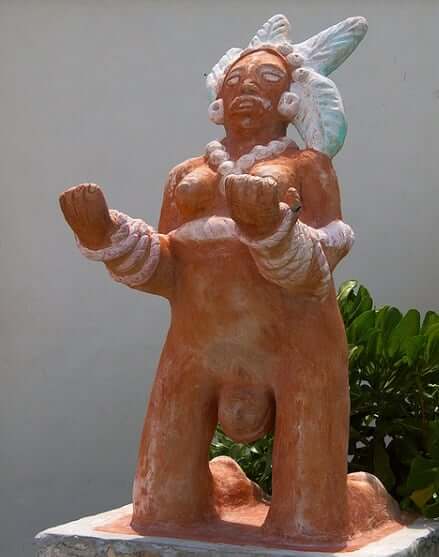 The Maya Ixchel was often depicted as a serpent wearing a skirt and crossbones and carrying an upside-down vessel in her hands. From this vessel, she provided the gift of water (and thus life and sustenance) to the people of the Earth. Portraying this important goddess as a serpent was no accident.

The snake was one of the Mayans ‘ most sacred symbols for several reasons. First, the gaping hole of a snake’s mouth allowed it to swallow its prey whole, which was thought to signify a powerful metamorphosis that humans could not perform.

This was sacred magic beyond our realm. Also, serpents were associated with the sky and its wisdom, which further supports the idea of Ixchel as a sky goddess. The snake was also thought to represent Ixchel’s healing powers, as serpents are associated with medicine. An ancient divine doctor, this goddess possessed unmatched intuitive forces.

Secondly, Ixchel meaning would have been viewed as the great Mother. Goddess of motherhood, the menstrual cycle, and fertility. It is no wonder that the moon was commonly used as one of her symbols. While she sits inside a crescent moon (holding a rabbit, I might add), Ixchel guides the formation of babies in the womb and determines their sex.

Her infinite wisdom is also reinforced with symbols of the moon. Creatures and deities of the night do not require the sun’s bright light to be successful in their endeavors. Rather, they remain silent, moving quietly and gaining great wisdom from their dark treks.

To receive this wisdom is a major gift and must be earned and deserved through subtle and humble means, not brashness. The Mayans believed she used her wisdom, maternity, and quite frankly, old age to manipulate the dark shadows of night and restore balance to the Earth.

Because they are conducted in the dark, many of the negative and harsh experiences of life are thought to be the work of Ixchel, weaving consequences behind the scenes to teach valuable lessons to humans.

Things You Should Know About Maya God and Goddess Symbol

Ixchel meaning is also portrayed as the Crone. In these depictions, she also beholds all of the other symbols listed above. As an older woman, she is all-knowing. She possesses the gifts of medicine and thus represents the serpent.

She has been a mother and has matriculated toward further knowledge, making her the ruler of the night. As the Crone, she no longer requires the bright light to see what is there. She uses her great spiritual knowledge in the light of the moon, assisting the much younger mothers in procreation and raising children.

Ixchel the Crone, too, holds her vessel, blessing the Earth with rain and fertility and punishing it with floods and hurricanes. She was the ultimate in multi-faceted goddesses, which explains both the reverence and terror she provoked in the ancient Mayans.

In a word, Maya God and Goddess Symbol show that no one was born wise, but it is a skill to learn, develop and use to boost our lives. Wisdom helps.