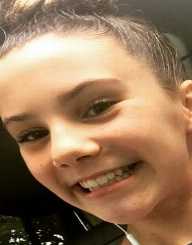 Olivia Rodrigo was born on February 20, 2003, in California, United States of America. Nothing much is known about her family as she tends to keep her private life private. She attended Dorothy McElhinney Middle School. She was attracted to acting at a very tender age. Her favorite film when she was growing up was ‘American Girl’ which she started watching when she was seven. She was so intrigued by the film that she wanted to be a part of it. When Olivia is out on shoots or has a busy schedule, then she is homeschooled on sets. Her parents got her a homeschool teacher to aid in the same.

Olivia Rodrigo climbed the ladder of fame when she appeared in girl flick ‘American Girl: Grace Stirs up Success.’ She played the role of Grace who is a young who loves baking and then she gets an unexpected visit to Paris, France. Olivia was so good at what she did that she was the best among her peers. She was so much attracted to acting that nothing could deter her from going for what she wanted. Olivia is always optimistic as she positively views all things. Her positive nature did not only get her one lead role, but other lead roles came knocking on her door. Her role in the film ‘American Girl: Grace Stirs up Success’ was her first movie success.

Presently, Olivia is starring in a Disney TV Sitcom called ‘Bizaardvark.’ The film is about two teenagers and how they live their lives and all the other things that revolve around their lives. The movie showcases the characters of a teenager who wrote and performed their songs. Olivia has gained not much fame, but she has had success in her career so far. She undoubtedly has a bright future ahead of her if she does not give up on her career but continue to pursue it.

Her co-stars praise Olivia Rodrigo as a very humble and friendly person. She is always everywhere lighting up people’s days with her pleasant smile and positive approach to life. She is also very generous and appealing to strangers too. Her co-stars also note that she is friends with almost everyone as she does not discriminate on who to be associated with. She has a lot of maturity at a very young age of just thirteen. She can make judgments that can be considered mature and not in need of any reviews. She is serious about her career, and she is out to improve her skills every time she gets an opportunity to do so.

Olivia is not only an actress but she also a singer and she plays musical instruments such as the keyboard. She likes spending time with her friends anytime, be it she is on set or not. She is a beautiful soul to be around. She is admired by both her seniors and juniors because of her unusual traits. She is a role model to many of her co-actors. She is a member of ‘The Project for Women.’ This project involves women who talk about what they have undergone in life, their success and failures and how to cope with the difficulties that come with living in this world that we are in.

Olivia Rodrigo's membership in the project mentioned above shows that she is a person who has her priorities right and optimistic at the same time. Not much is known about Olivia’s family and siblings as she likes to keep her personal life from the public eye. With her success as a child actress, she is destined to a lot of success in her adulthood.