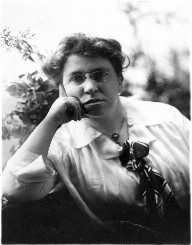 Emma Goldman was born in Kaunas in present-day Lithuania, then part of the Russian empire on June 27, 1869. She was the daughter of Abraham Goldman and his wife, Taube Bienowitch. She had five other siblings in the family.

She grew up in a dysfunctional family. She suffered violence from his father while her mother became a silent observer. Goldman developed defiance and resistance as the only way to defend herself. She only opened up to her elder sister Helena as a friend.

As years went by, Goldman grew up to defy any authoritative figure in her life. She became rebellious to her parents, teachers, and any person who tried to help her. In his retaliation, Abraham Goldman discontinued her education from the formal school system. She obliged and started studying on her own. Goldman became a self-taught student. She did odd jobs to support her mother and siblings since their father technically abandoned them to poverty.

In 1885, Emma Goldman moved to the US at the age of 16. She settled in Chicago with her sister and the husband who had emigrated earlier. With little formal education, Goldman got a job at a local clothing factory as a seamstress.

She became actively involved in the union movement. She organized the workers against the labor injustices and lack of better representation to the management. Goldman became a target for factory owners’ surveillance machinery.

In May of 1886, the workers of Haymarket Square in Chicago staged an industrial strike. They held a rally in support of the implementation of the eight-hour working day. A bomb thrown from the crowd killed seven police officers. The identity of the bomber was never revealed, and no arrests were made. The police responded by arresting and prosecuting several local anarchists. Emma Goldman, like most of the unionists, was appalled by the police action. She gradually drew closer to the anarchist ideology.

In 1889, she moved from Chicago to New York. Goldman met with the leading anarchists in the state. She met Alexander Berkman, who after a while introduced her to publisher anarchist Johann Most. Most owned, edited, and published the anarchist journal with a German name Die Freiheit. A gifted orator, Most impressed Goldman after attending one of his speeches. She decided to join the mainstream anarchist movement.

Emma Goldman made her debut speech accompanied by her mentor Johann Most in 1890. She did many other lectures on several tours she went with him. She also created a working relationship with Alexander Berkman in 1892. They made a plan to kill the Carnegie Steel Company manager Henry Clay Frick. Frick had been in the spotlight for opposing labor rights for workers.

Since they were involved with the workers union movement, Goldman and Berkman found murdering Frick as their only way to silence the anti-workers bosses. Berkman got arrested after a failed attempt to kill Frick. He was tried and jailed, while Goldman escaped a prison sentence for lack of substantial evidence.

In the wake of the economic crunch that gripped the US in 1893, Emma Goldman and her colleagues stepped up their campaign for better industrial terms for workers. She gave a fiery speech to a meeting of the unemployed. The meeting degenerated into chaos with the police. She got arrested and charged for inciting people to violence.

This time, Goldman got a prison sentence for her actions. As part of her reformation program in jail, she enrolled for a nursing program. She finished her medical studies as a nurse, though she never practiced medicine.

Emma Goldman returned to her movement upon her release from prison. In 1896, she published her first anarchist book titled Anarchy Defended by anarchists. In 1906, she did establish a controversial magazine Mother Earth.

She used the magazine to propagate her views on birth control, labor rights, government regulations, and women empowerment. Alexander Berkman, now out of jail, edited the publication. She toured the country publicizing the magazine while delivering fiery speeches on anarchism.

Emma Goldman got an ally in the pro-contraception campaign. She teamed up with Margaret Sanger to publicize the debate through the media. In June 1914, they published a controversial column in a local feminist journal The Woman Rebel. She continued with her nationwide anarchist tours in 1915 and 1916. Defiant in nature, she got arrested severally and released.

In 1917, she led a campaign against the forceful conscription of young men into the military for WW1. With her No-Conscription League, she spearheaded a futile battle against Congress and the executive. In 1920, Goldman went into exile in Russia after the US government declared her a persona non grata. She left Russia for London and reached Canada in 1927. In 1936 she went to Spain during the Spanish Civil War and founded an organization for helping the vulnerable women and children in the war.

In 1887, Emma Goldman married Jacob Kershner and divorced the next year. She then married James Colton in 1925, with whom they stayed together until her death

Emma Goldman died on May 14, 1940, at the age of 70. In 1981, a film in her honor titled Reds was produced. In her stay in the US, the media nicknamed her the Most Dangerous Woman in America.