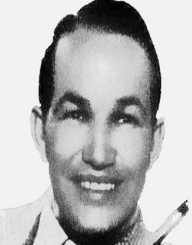 Self-dubbed as the King of Western Swing, Spade Cooley was a bandleader, actor and TV host whose time on the limelight came to a halt when he was convicted of murdering his second wife. He was honored his star at the Hollywood Walk of Fame on February 8, 1960.

Oklahoma had a second wife named Ella Mae Evans of whom he was found guilty of murder.  Evans served as one of the singers in his band before the couple tied the knot. His marriage to Evans brought forth three children; a daughter named Melody and two sons namely Donnell Jr. and John.

Born on December 17, 1910, as Donnell Clyde Cooley in Pack Saddle Creek, Oklahoma, he came from a low-income family and had a trace of Cherokee blood in him. His family later relocated to Oregon where Cooley played the violin on the side to earn additional money. He attended Chemawa Indian School, located in Salem for his education and his family once again relocated to California in 1930.

Coming from a family of fiddle players, Spade Cooley soon adopted the skills and began playing at local dances. He started playing alongside Jimmy Wakely and his band at the Venice Pier Ballroom in California and soon enough replaced Wakely as band leader when the former left to pursue a movie role.

Spade Cooley continued playing with the band at the Venice Pier Ballroom until the early half of the 1940s. Soon enough landed a record deal and recorded his breakthrough hit, Shame on You, on December 1944.  The song topped the charts for two months upon its release.

With looks similar to those of actor Roy Rogers, he filled for a couple of parts and as a stand-in for the actor. All in all, Cooley appeared in a total of thirty-eight Western films altogether. He was simultaneously making his music alongside his acting by the early to mid-1940s by then.

He gave himself the name "King of Western Swing" when he won the battle of the bands event held at the Venice Pier Ballroom against Bob Wills and His Texas Playboys. There was no recorded date of the event, but people claimed that the title was more deserving to Wills.

Spade Cooley also expanded his presence in television beginning in June 1948 as a host of a variety show on KTLA-TV in Los Angeles, California entitled Hoffman Hayride. The show bagged the local Emmy Awards of 1952 and 1953 and even had prominent guests at the program such as Frank Sinatra, Dinah Shore, and Frankie Laine to name a few.

In 1961, the world turned eyes toward Spade Cooley not for his music and acting but to the murder of his wife. He started suspecting his wife for adultery despite him having his affairs and her asking for a divorce. Cooley filed for divorce on March 23 and sought custody of his three children. The divorce was never finalized due to him being accused of murdering Evans by the Kern County grand jury on April 26, 1961.

Melody, his eldest child who was 14 at the time, testified against him on the court when she recalled to the jury how her father forced her to watch as he continuously beat her mother's head on the floor. By August 21, 1961, the grand jury ruled him as guilty of first-degree murder. He was sentenced to serve a lifetime in prison instead of facing execution in the gas chamber.

On November 23, 1969, Spade Cooley suffered a massive heart attack backstage after performing at a benefit concert held at the Oakland Auditorium. He died shortly after and was later interred in Hayward's Chapel of the Chimes cemetery.