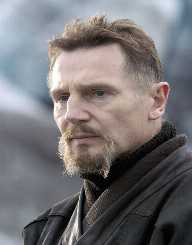 Liam Neeson is an actor, born in Ballymena, Ulster, Northern Ireland. He was born in 1952. Best known for his major motion picture works, such as Schindler’s List and Star Wars: Episode I – The Phantom Menace, Neeson has had a varied career ever since the 1970’s. His employment has included the stage, the small screen, the big screen, and voice work. Despite personal tragedy in 2009, he shows no signs of slowing down.

Liam Neeson was born in a part of Northern Ireland called Ballymena, County Antrim, to parents Katherine and Bernard Neeson. His roots were simple; mother was a cook and father was a primary school caretaker. At age nine, Neeson began boxing lessons and eventually became Ulster’s senior amateur boxing champion. Boxing gave him his distinct nose because it had been broken. His boxing ability came in handy for more than one movie role later in life.

When Liam Neeson was eleven, he showed an interest in acting in school plays. A minister by the name of Ian Pasley was another influence on young Neeson. Neeson would slip into the back of Pasley’s church to watch him “perform” behind the pulpit.

His official acting career began on stage. In 1976, Liam Neeson joined the Lyric Player’s Theater in Belfast. From there, he played the title role in a minor film adaptation of Pilgrim’s Progress (1978). Shortly after that, he moved to Dublin and joined the National Theater of Ireland, known as Abbey Theater. While Neeson was performing as “Lenny” in Of Mice and Men, director John Boorman discovered him. Neeson was offered a part in the 1980 movie, Excalibur. After that, he moved to London and continued stage acting there. He also did television and small budget movie parts.

Liam Neeson's next break came in 1984 when he played alongside Anthony Hopkins in The Bounty, and in 1986 when he played alongside Jeremy Irons and Robert DeNiro in The Mission. Neeson’s first Oscar nomination came in 1992; Steven Spielberg had chosen him to play Oskar Schindler in Schindler’s List. His most significant 29th century box office success came with Star Wars: Episode I – The Phantom Menace. He played Jedi Master Qui-Gon Jinn. Although the movie received mixed reviews, his performance was well-received.

The 21st century did not see the end of Liam Neeson's career. He starred in documentaries, historical pieces, and novel adaptations. Neeson also delved into voice talent for television and movies such as The Simpsons and The Chronicles of Narnia. In 2008, he starred in an action-thriller called Taken. It was about a former CIA operative who must use his specialized training to track down and save his kidnapped daughter. It earned him a new audience and new roles. While he continues to do documentaries and BBC special projects, he has stated that there are some roles he has grown “too old” for.

In 1980, Liam Neeson met Helen Mirren after filming Excalibur with her. The two lived together for much of that decade before moving on. In 1992, Neeson met Natasha Richardson while the two of them were in a play together. Natasha Richardson was the daughter of Vanessa Redgrave and Tony Richardson. They fell in love, and in 1994, the two married. They had two children together: Michael and Daniel. Sadly, Natasha received a severe blow to the skull and died while skiing with Neeson in 2009.