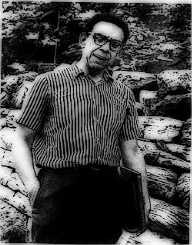 Asa Bundy Sheffey was born on August 4, 1913, in Michigan, USA. His parents were Ruth and Asa Sheffey. However, his parents were divorced when he was a child.

He was raised by a foster family for most of his life. His foster parents’ names were Sue Ellen Westerfield and William Hayden. The foster family was not very loving, and he would later remember his childhood as one of the worst parts of his life. He later went by the name Robert Hayden. This is the name he is best known for now.

Robert Hayden threw himself into his studies at a young age. He excelled in school and graduated from high school in 1932. His great grades earned him a scholarship that would pay for a good portion of his college expenses. He first attended Detroit City College (which was later renamed Wayne State University). He graduated from the college in 1936.

After graduating from college, Robert Hayden started his first serious career working for the Federal Writer’s Project. This project encouraged authors to continue writing, even though the economy during the great depression made it difficult to earn a living from writing. While working on the project, Hayden studied and wrote about African American culture, myths, and history. He stopped working for the project in 1938 to focus on his personal writing more.

Robert Hayden is most famous for his poetry. He was set apart from many other poets of the time because he wrote many of his poems in the way that words sounded in the African American dialect, versus how they were actually spelled. This worked well in his poems, as he most often wrote about African American people and the struggles they faced in daily life. Some of the research on African American history he did while working with the Federal Writer’s Project was put into his poems as well.

He published his first collection of poems in 1940. Robert Hayden did not publish his second collection of poems until 1948. He continued to publish poem collections at a rate of about one collection per decade from the 1950’s to 1970’s. He also once had a series of political poems, protesting the Vietnam War. Some of his other famous poems and books are listed below.

In 1941, Robert Hayden returned to college to earn a graduate degree. He studied at the University of Michigan. He focused his studies on English Literature. He studied the famous poems that came before him, especially those who had made brilliant poems about African American life. One of his major influences in poetry was Langston Hughes. He graduated from the school in 1942.

Robert Hayden won the Academy of American Poets Fellowship in 1975.

Robert Hayden was named the first African-American Poet Laureate in 1976. (When he won the award it was called ‘consultant in poetry to the Library of Congress.)