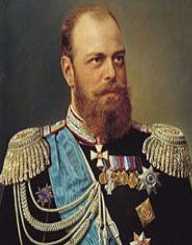 The second last tsar of Russia Alexander III was born in St Petersburg on the 10 March 1845. He was the second son of Alexander II of Russia, the tsar who had freed Russian serfs in 1861.

Alexander III was tutored by Constantine Petrovich Pobedonostsev who believed in an authoritarian approach to ruling that any opposition needed to be harshly dealt ruthlessly stamped out. Pobedonostsev was also anti-Semitic and influenced his pupil.

The Reign Of Alexander III

After the death of Nicholas, Alexander married his brother’s fiance, the Danish Princess Dagmar and became second in line to the throne.

After the assassination of the Tsar, Alexander III opted out of implementing a planned constitution, he also censored the press and sent large numbers of revolutionaries to Siberia. His Accession Manifesto proclaimed his faith in the autocracy.

His reign was marked by autocratic rule and the strengthening of Russia’s military while at the same time maintaining peace with surrounding countries. The fallout from his regression in abandoning the constitution and return to a more autocratic rule by the tsar laid the seeds for the Russian Revolution of 1917.

The simple life he led earned him the nickname was the Peasants Tsar. He was also a family man.

The imperial train was involved in an accident in October 1888, and Alexander III suffered an injury to a kidney that later led to nephritis.

Alexander III died from complication of kidney disease on the 1 November 1894.