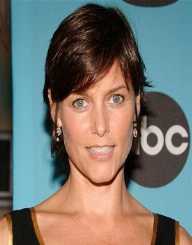 Carey Lowell is an American actress and model, best known for her roles in the James Bond film License to Kill and in the television show Law and Order.

Carey Lowell was born in the town of Huntington, New York, on February 11, 1961. Her father, James, was a geologist. She moved around a lot with her family. She lived in the Netherlands, France, and Libya. In the United States, she lived in Virginia and Texas, before settling down in Colorado. She graduated from Bear Creek High School.

Carey Lowell spent a year studying at the University of Colorado at Boulder. After that, she moved to New York City. She briefly attended New York University. She also attended the Neighborhood Playhouse School of the Theatre in Manhattan.

Right after high school, Carey Lowell signed with Ford modeling agency. She spent a while working in New York City, modeling for brands such as Calvin Klein and Ralph Lauren. She also appeared in a few plays.

Lowell made her big screen debut in 1986 in the thriller film Dangerously Close. She then starred in another thriller called Down Twisted, and in the comedies Club Paradise and Me and Him. In 1989, she appeared in one of the most famous roles of her career.

Carey Lowell played the FBI agent Pam Bouvier in License to Kill, part of the James Bond franchise. Bond himself was played by Timothy Dalton.

That show was quickly canceled. She also had a small role in the popular romantic comedy Sleepless in Seattle. After that, she appeared in the romantic dramas Love Affair and Leaving Las Vegas, as well as the comedy Fierce Creatures.

In 1996, Carey Lowell started working on the legal drama Law and Order. She played the role of Jamie Ross, an attorney. It became one of her best-known roles. She stayed on the show until 2001. She reprised this role in Homicide: Life on the Street and Law and Order:

Trial by Jury. After that, she had small appearances in the drama shows Big Apple, Six Degrees, and Blue Bloods. She was part of the HBO miniseries Empire Falls. In 2012, she voiced her old character, Pam Bouvier, in the video game 007 Legends.