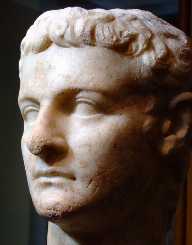 Caligula was born on August 31, 12, in Antium, Italy. Antium is now known as Anzio.  His parents were Germanicus and Agrippina the Elder. He also had five siblings that lived to see adulthood: Agrippina the Younger, Drusus Caesar, Julia Drusilla, Julia Livilla and Nero Julius Caesar.  He was later nicknamed Caligula, which is the name he is best known for now.

As a child, Caligula would often join his father in military campaigns. He wore a smaller version of a soldier's outfit. Because he wore tiny boots with his outfit, the soldiers called him Caligula, which translates to “little boots.” This name stuck with him for the rest of his life.

Caligula’s father was the Emperor, but after he died, while Caligula was still a child, a man named Tiberius, the stepson of Augustus, was named the heir. During his reign, Caligula lived with his mother for the most part. In 33, Caligula took the position of quaestorship, which was a type of government position. He held his position until 37.

In 37, Emperor Tiberius died. He was sick before his death, but it was also rumored that Caligula murdered him to gain power. This has never been proven as fact, though. At this point, Caligula and Gemellus were both named Tiberius's heirs. They were cousins and both fairly young teenagers at this time. Gemellus (also known as Tiberius Gemellus) was the grandson of Tiberius. Not much else is known about Gemellus’s early life. He was on However, Caligula and Germanicus were not joint leaders for long, as Caligula claimed that Gemellus was insane and unfit to lead the country.

Later in 37, Caligula adopted Gemellus. In the early part of his first year as Emperor, he was a great leader. He paid the military more, which kept the soldiers happy. In less than a year, he became drunk with power and executed nearly anyone who threatened him, or even seemed like they might threaten him one day. He executed not only strangers but also some of his brothers and Gemellus, who he thought were plotting against him.

The Roman people had mixed feelings about Caligula and his reign. On the one hand, he was considerably lowering taxes, which the people loved. Of course, lowering taxes made it, so the country did not have as much money as it was used to. The previous Emperor, Tiberius, had stockpiled money which Caligula was quickly running through. Soon, the country was deeply in debt. Also, the way he executed many people did anything but raise his popularity.

Even though the country was low on funds, Caligula put various work projects into place. He spent money on the construction of buildings and temples around Rome. This only puts the empire deeper into debt.

In 39, Caligula began arguing with the Senate for the way he was ruling the country. He later thought the many Senate members could not be trusted (mostly likely because they did not agree with him) and investigating them. Later, he replaced most all of the Senate members and even had some of the original members of the Senate executed.

In the next year, a conflict was arising in Rome, as the Greeks and Jews were fighting with each other. Greeks were spreading their own culture quickly, and the Jewish people were trying to do the same. Riots were in the streets. To try to calm the situation, Caligula put a statue of himself in Jerusalem. Needless to say, this did not calm the situation.

Also in 40, Caligula expanded the Roman Empire so that it now contained Mauretania. He also tried to conquer the area that is now England, but he failed. Nonetheless, gaining Mauretania helped to boost the Roman Empire’s economy and Caligula’s popularity.

Caligula later ruined his own popularity by claiming that he was a god on earth. He replaced some statues of the gods with his face; he dressed like what he imagined a god would dress like, and asked the Roman people to worship him. Later in 40, he moved to Egypt, where he thought he could better live as a god. Leaving his political responsibilities behind, the Senate and even the average citizen was upset with his leaving, considering it as a form of abandonment.

Caligula was first married to Junia Claudilla in 33. They were married for only a short time before Junia died in childbirth. He married again soon after to a woman named Caesonia. This couple had a daughter together, who Caligula later murdered.

Caligula died on January 24, 41. He was stabbed to death by Cassius Chaerea, a soldier, and his co-conspirators. The motive was simply to end Caligula’s deadly and otherwise disastrous reign.

Caligula’s murders were quickly captured and killed. Caligula’s uncle, Claudius, became the next emperor of Rome.