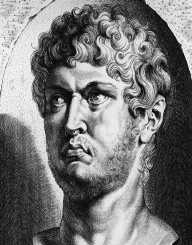 The Roman Empire tells stories about the reign of this great man. Nero was a Roman Emperor as well as the last emperor of the Julio-Claudian dynasty. He ruled between 54 to 68 AD and was notorious for his actions. He was a brutal, ineffective and highly tyrannical fellow. Nero lost his father at a very tender age before his mother married his uncle, a Roman Emperor. She persuaded the uncle to adopt him and proclaim him as the heir to the throne. Ancients Historians were of the view that Claudius was poisoned for her son to ascend the throne. After the death, he became the youngest emperor ever crowned.

Nero, however, did a lot of misdeeds after he had his mother murdered. He ruled well in the initial years due to his mother influence. However, after his mother’s death, he became notorious and deviant sexually. He threw the whole Rome into turmoil, and his cruelty was legendary. Nero was condemned to death and regarded as the public enemy. This made him commit suicide to avoid shame and death sentence.

Nero was born as Lucius Domitius Abenobarbus on the 15th day of December 37 in Antium, an area closer to Rome. He was the only son of Agrippina, the younger and GnaeusDomitusAbenobarbus. His father died when he was 11 years, and this made his mother marry his uncle, an emperor too. He was adopted and renamed Nero Claudius Ceasar Drusus Germanicus. Later on, Claudius was persuaded to proclaim him as the heir to the throne. At age 14, Nero started addressing the Senate and featuring in coinage. He also was appointed as proconsul and took an active part in the governance.


ACCESSION TO THE THRONE AND YEARS ON THRONE

Many believed that Claudius was poisoned to pave the way for the young Nero. As at that time, Nero was only seventeen years old and was chosen to ascend the throne. He became the youngest emperor at that period. His mother was a domineering and highly ambitious person. She tried to influence all his actions and control his decision making during his initial tenure. The first few years of his rule was that of a reasonable leader who was empathetic, loving and protecting.

However, Nero strived to be independent of his mother’s influence. Things changed during this period. He Found his mother’s interference to be overbearing and murdered her. His trusted advisor too died some years after his mother’s death and the other retired from public life. He started executing his enemies for an accusation of treason was made against him then. The already known reasonable leader then started becoming a dictator.

Surprisingly, Nero was able to handle a war between the roman empire and Parthian Empire over the control of Armenia which has been ongoing as far as 58 AD. Despite his aversion to battles and his young age, he chose to bravely strike a peace deal with the people to make Armenia a buffer state. His worth decreased when people widely believed that he started a destructive fire which killed and destroyed a lot of things. The fire raged for five days and destroyed three of the fourteen Roman districts. Nero, however, implemented a scale relief effort to provide the victimsuccor. He used his funds to finance the relief efforts. He also took part in the search and rescue of the victims.

Nero provided home in his palace for the homeless. He was unpopular among the masses and indeed had different antagonists. Gaius Piso, a Roman Statesman, conspired to kill him among others. He then ordered his leading conspirators to be killed having learned about the conspiracy. Three years later, Nero was rebelled against by the majority of the Senate and governor. He was declared as the public enemy and condemned to death. He committed suicide to avoid the shame attached to it.

Nero married his stepsister, Claudia Octavia but was never happy with her. He later became romantically involved with his friend’s wife. He divorced Octavia in 62 AD to marry his friend’s wife, Poppaea. The latter, however, died with her second child in 65 AD. She became involved with another married woman whom he drove her husband into committing suicide for him to marry her. The marriage occurred in 66AD. He also had a young man castrated because of his resemblance to Poppaeafor him to marry him. Nero died on 9th June 68 after he lost most of his supporters and heard his death condemnation.