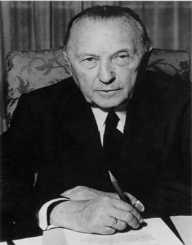 Konrad Hermann Josef Adenauer was born on the 5 January 1876 in Cologne, Germany to Catholic lawyer Konrad Adenauer and his wife, Helene Scharfenberg. Adenauer was the third of five children born into the family.

After graduating from the Apostelgymnasium in 1894, Konrad Adenauer was starting a bank apprenticeship when he was awarded a scholarship to study law at Freiburg University.

After passing his bar exams in 1901, Konrad Adenauer started working for the Public Prosecutor at the Cologne Regional Court. In 1902, he was offered a job at a law firm headed by Hermann Kausen.

Adenauer joined the German Center Party in 1905, and in 1906 was elected a city councilman in Cologne and in 1917, he was elected Mayor of Cologne.

In 1932, Adenauer was Mayor when the Cologne-Bonn autobahn was opened, and he presided over the opening ceremonies. Then in 1933, Adenauer ran into trouble when he refused to receive Hitler who was on a campaign visit to Cologne. Adenauer had the Nazi flags removed from the Deutzer bridge, and this resulted in his removal from the office of Mayor of Cologne.

In 1934, Konrad Adenauer was arrested and kept in custody for a couple of days, and in 1944, after the failed assassination attempt on Hitler’s life, Adenauer was put into a concentration camp. After WW II, in May 1945, the American forces restored Adenauer to his position as Mayor of Cologne. The British promptly removed Adenauer from office in October 1945 when Cologne became part of the British Occupation Zone.

Konrad Adenauer founded the Christian Democratic Union in the British Occupation Zone. He also became the leader of the party.

The three Western Allied Occupation Zones were declared The Federal Republic of Germany on the 23 May 1949. Adenauer was chairman of the group that wrote the new German constitution. The same year he was elected to the German parliament, and in September, he became the first Federal Chancellor. At the same time, in October 1049, the German Democratic Republic (East Germany) was formed from the Soviet-held territory, and East Berlin came into being.

Adenauer died on the 19 April 1967. He was given a state funeral in Cologne Cathedral which many foreign dignitaries attended.

Konrad Adenauer was born into a Roman Catholic family.