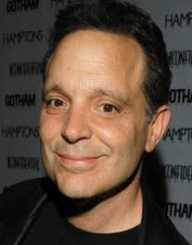 Richard Jeni was an American actor and comedian.

Richard John Colangelo was born on April 14, 1957, in Bensonhurst, Brooklyn, New York. He came from an Italian-American family and had two siblings, named Mary and Joseph.

After graduating, Colangelo spent a few years working for PR agencies. He eventually decided to become a comedian and changed his last name to “Jeni”. He initially performed in various stand-up clubs in Brooklyn and Manhattan. In 1988, he made his TV debut in The Tonight Show with Johnny Carson. In 1990, he had his first special on the Showtime network, titled Richard Jeni: Boy From New York City.

Two years later, he filmed his second special, titled Crazy from the Heat. Later that year, he filmed Platypus Man, his first HBO Special. Apart from his specials, he was a frequent guest on The Tonight Show with Jay Leno. He also filmed a commercial for Certs, a type of breath mint. In 1994, he had a supporting role in the popular film The Mask.

In 1995, Jeni starred in the first and only season of Platypus Man, a sitcom based on his HBO special. That same year, he landed a voice role in the animated series Dr. Katz, Professional Therapist. In 1997, he starred in the comedy film Dad’s Week Off.

In 1989, Comedy U. S. A. awarded Jeni with the Best Nightclub Comedian Award. In the 1990s, he earned two Cable ACE Awards. The first one was for his first Showtime special and the second one was for one of his HBO specials.

He also won a Clio Award for his work on the American Dairy Association advertising campaign. In 2004, Comedy Central ranked him as one of the best stand-up comedians of all time.

Richard Jeni shot himself in his home in West Hollywood on March 10, 2007. His girlfriend, Amy, found him and called an ambulance. The paramedics transported him to Cedars-Sinai Hospital, where he passed away. Richard Jeni was 49 years old. His family later revealed that he had suffered from clinical depression, psychotic paranoia, and schizophrenia.