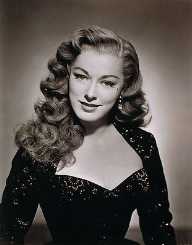 Eleanor Parker was born on June 26, 1922, in Cedarville, Ohio, USA. Her parents were Lester Day Parker and Lola Isett. She also had two older siblings.

Eleanor Parker had an average childhood, growing up in the humble state of Ohio. However, from an early age, it was obvious that she was anything but an average child. She loved to act in her school’s plays, as well as performing in other community theatre events. As a teenager, she spent some time learning and acting with the Rice Summer Theater, in Massachusetts.

She continued to do these things until she finally graduated from Shaw High School. After graduating from high school, she went on to study at the Pasadena Playhouse, in California. While at the high school and at the Playhouse, Eleanor Parker was offered many acting jobs, but she turned them all down. She wanted to wait until she finished her education before she started to work, and that’s exactly what she did.

Eleanor Parker started her acting career early in life. She signed on with the Warner Brothers when she was only 18 years old. She started out in small roles, but as her fame grew, so did the importance of her roles on the screen. Her first role was Nurse Ryan in short, Soldiers in White in 1942. She could play anything from a funny side character to a grumpy villain, and even a romantic heartthrob. Her fame began to soar when she earned the role of the malicious character, Elsa Schrader, in the 1965 musical, the Sound of Music. After the 1970’s, Eleanor Parker mostly worked in bit parts on television shows, but for the most part, she was enjoying her time away from work. However, she did not officially retire from acting until 1991. During her career, she worked in over 80 films and television shows. Some of her other famous films are listed below.

Throughout her acting career, Eleanor Parker has won only one award and has been nominated for eight others. She was nominated for an Oscar three times, a Golden Globe once, an Emmy once, and a Golden Laurel three times. She won the International Award at the Venice Film Festival for Best Actress in 1950 for her role in Caged.

Eleanor Parker earned her star on the Hollywood Walk of Fame in 1960.

Eleanor Parker died on December 9, 2013, in Palm Springs, California. She was 91 years old when she passed away from complications of pneumonia.