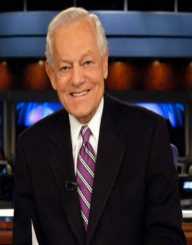 Bob Lloyd Schieffer is an American television journalist who has spent most of his broadcast career with the CBS. Born on February 25, 1937, he started his CBS career in 1969 and had since served in different capacities including anchoring several news programs.

He is best known as the moderator of presidential debates. Bob Schieffer started his journalism career with Star-Telegram as a reporter before moving to CBS. He served as a correspondent to the Pentagon, White House and covered the United States Congress and the United States Department of State. Schieffer served as the anchor for Saturday CBS Evening News from 1976 to 1996.

Bob Schieffer served as the moderator of Face the Nation 1991 until May 31, 2015. He also anchored shows like the weekday CBS Evening News. Schieffer is also an author and has three books to his credit including Face the Nation: My Favorite Stories from the First 50 Years of the Award-Winning News Broadcast, This Just In: What I Couldn't Tell You on TV, and Bob Schieffer's America.

Alongside Gary Paul Gate, he co-wrote The Acting President, a book about Ronald Reagan. He won several awards throughout his career including eight Emmy Awards and the Paul White Award.

Bob Lloyd Schieffer was born toJohn Emmitt Schieffer and Gladys Payne Schieffer on February 25, 1937, in Austin, Texas. He was raised in Fort Worth Texas. He has a brother Tom Schieffer who became US Ambassador to Japan from 2005 to 2009 and a sister Sharon Schieffer Mayes, an educationist.

Bob Schieffer received education from North Side High School and later at the Texas Christian University (TCU). While in TUC, he joined the Air Force Officer Training Corps and was a member of the Phi Delta Theta fraternity. In 2013, the College of Communication at TCU was renamed in his honor.

Bob Schieffer joined the US Air Force as a public information officer after graduating from college. Initially stationed at Travis Air Force Base, he later served at the McChord Air Force Base. He was discharged honorary.

After the army military service, Bob Schieffer was hired by Fort Worth Star-Telegram as a reporter. One of his topmost assignments while there was traveling to Vietnam to profile soldiers from the Fort Worth area. He a successful career as a radio reporter, he joined Star-Telegram's television station WBAP- TV

Bob Schieffer joined CBS in 1969 and by 1973; he was the anchor of the CBS Sunday Night News. He anchored the program until 1974 and then the CBS Sunday Evening News in 1976.

That same year he moved on to anchor Saturday Evening News broadcast, which he would for the next 20 years until 1996. The renowned broadcast journalist also anchored the Weekday CBS morning show from 1979 to 1980. He became known as the host of the show Face the Nation from May 1991 to May 31, 2015.

On March 10, 2005, Bob Schieffer was named the new anchor of the weekday CBS Evening News after the retirement of Dan Rather. After taking over the show, the viewership increased by 200,000 to an average of 7.7 million viewers. The ratings of the show also saw an increase from its decline during the tenure of Rather. Katie Couric replaced him after his last broadcast on August 31, 2006.

Aside from his broadcasting duties at CBS, Bob Schieffer also served as a reporter in different capacities. From 1970 to 1974, he served as the CBS correspondent at the Pentagon. He was later assigned to the White House from 1974 to 1879.

Schieffer rose to become the Chief Washington correspondent from 1982 through 2015. He currently serves as the Walter Shorenstein Media and Democracy Fellow at Shorenstein Centre in Harvard Kennedy School.

In 1967, Bob Schieffer married Patricia Penrose. They have two children. He was diagnosed with grade III bladder cancer in 2003 and successfully underwent treatment. He is also living with type 2 diabetes and undergoes insulin therapy.

Bob Schieffer has won several awards including Edward R. Murrow Award, Paul White Award and had eight Emmy awards. He is an inductee of the Broadcasting & Cable Hall of Fame since 2002. In 2013, he was also inducted into the National Academy of Arts and Sciences Hall of Fame.

Bob Schieffer has written three books on his journalism career. In 2003, he published This Just In: What I Couldn’t Tell You on TV. He followed it with FACE THE NATION My Favorite Stories from the First 50 Years of the Award-Winning News Broadcast, 2004 and Bob Schieffer's America in 2008. His latest work is Overload: Finding the Truth in Today's Deluge of News in 2017. He collaborated with Gary Paul Gates to write Good Show, President Reagan: THE ACTING PRESIDENT published in 1989.