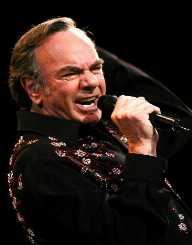 Neil Diamond is a celebrated American singer and songwriter, with a long career stretching over decades, from 1960’s. He has enjoyed great success in his career music wise and has sold over 115 million records, becoming a world’s best selling artist of all time. He is the top three most winning artist in Billboard charts, since their invention, in the adult contemporary field. Thirty-eight of his songs have maintained their stature in the top ten lists of these charts. His songs gained fame widely in the international scene, and many artists and performers have released their covers all over the world. Early life Neil Leslie Diamond was born on January 24, 1941in Brooklyn New York.

Neil Diamond was born to Akeeba `Kieve’ Diamond, a dry goods merchant, and his wife, Rose. His parents were Jewish and are believed to have Russian and Polish origins. He was brought up in various homes in Brooklyn. During World War II, his father served in the army and the family was forced to a compulsory relocation to Cheyenne, Wyoming, for four years.

Neil Diamond attained his early education at Erasmus Hall high school, during their time at Brooklyn. While there, he was an active member of a freshman chorus and choral club. After his family relocated, he was forced to change schools and moved to Abraham Lincoln high school, where he attained high school diploma.

Neil Diamond joined the fencing team, which proved beneficial a bit later in his education pursuit. When Neil Diamond reached 16, he has gifted an acoustic guitar during his birthday, which sparked his interest in music greatly. Diamond could spend his time after graduation during the summers on a fulltime job as a waiter in a resort called Catskills. Courtesy of the fencing team he joined in high school, he was able to win a scholarship to New York University. There, was on a pre-med programme, and was destined to become a doctor on completion. However the course did not fulfill him in terms of his interests and ambitions and soon diverted his interest to music. By then, he had begun songwriting and was pretty good at it. At some point in his final year, he got a lucrative job offer of $50 a week for songwriting. This made him abandon his studies.

Neil Diamond’s musical career was portrayed right from his teenage years. When he was about sixteen, he attended a Jewish camp, and witnessed performances of a folk singer `Pete Seeger. The camp was such that other children wrote songs and performed for the singer also. This dawned heavily on young Diamond that he too could write song. Getting a guitar only raised his interest higher, and he started to take lessons and write songs. He found comfort and a certain level of satisfaction in songwriting and claimed it helped him grow out of his youthful frustrations.

His first job was a sixteen weeks contract job as a songwriter for Sunbeam Music Publishing and was paid $40 an hour. At the contract ends, it was not renewed and he became a self employed songwriter. Later in 1962, Neil Diamond teamed up with his high school buddy Jack Parker and the collaboration led to his first ever recording contract. The duo was called `Everly Brothers’ and recorded two unsuccessful singles. During the same year, Diamond signed with the Columbia Records. He was a solo performer and released a single that received excellent reviews. However, it was unable to chart, and Diamond was soon dropped and got back to songwriting. At this time, he did not achieve any stability for a seven-year period and changed publishing houses. These were hard times for him both financially and the number of songs he could be able to sell. At a certain point while working in Birdland club in New York, he released a couple of songs, among them `Solitary Man’. This was his first self recorded song that made it to the charts. In November 1965, success came calling in his songwriting endeavors, after releasing a couple of songs for example `Sunday and me’.

Neil Diamond released other big hits consecutively, and the following year, he signed a deal with Bert Bern’s Bangs Records. The contract brought forward more desired success, with song `Solitary man’ becoming his initial true triumph as a single artist. Here, he also released other sensational singles. Diamond was not satisfied with his achievements here and in 1968, he signed with MCA records. He relocated to Los Angeles in 1970, and during his time there, he released sensational singles that made it to the top music charts. An example is `Sweet Caroline’. The next year, he took a whole four months and came up with a top career hit `I am... I said’. During the year 1972, his career as a performing artist intensified. This happened especially in October, where he did ten shows at the Greek and also some shows at the Winter Garden theatre. His performances at the Greek were recorded, and an Album was made, called hot August night. It was a great successful hit. Neil Diamond got back to Columbia records in 1973 who offered him a lucrative deal concerning his albums.

His studio album total reached 10 in 1976, with the release of album `Beautiful Noise.’ At this time frame, Neil Diamond had many performances and was extremely popular, including during Grammys awards in 1980. He summed up his seventies in an orderly fashion, by releasing album `September mom’ as his last album at the time. More so, diamond featured as cast in American film `the jazz singer’, and received golden globe award nominations for his role. The 1980’s was a pretty dull century for him. His sales declined, and he only made it to the Billboard charts in 1986, with a hit solo. However, he resurfaced significantly from 1993 to 1998 with a couple albums, courtesy of Columbia Records. Later in the year 2005, Neil Diamond released 12 songs and some other albums. The 12 are some of his greatest stuff. He kept on recording and touring and he released more Albums, appearing in more charts and breaking more of his own and world records. His album `Home before dark’ had really extreme sales.

Neil Diamond keeps going in his musical career, and some of his recent works are `Hang the years’ and `icon.’ Awards and achievements -Sammy Cahn `Lifetime achievement award in 2010’. -Was added to the `long island music hall of fame’ in 2007. -Was honored as `musicales person of the year’ in 2009. -Was honored at the Kennedy centre in 2011. - Was awarded a star on Hollywood walk of fame. -Won Grammys award for `best original score’ soundtrack album. -Won a golden globe award for `best original score’ soundtrack album. Personal life Diamond’s personal life often acted as inspiration and foundation for his musical works. Back when he was a teenager, he used to write songs and poems for girls he liked. He has been in three marriages.

Neil Diamond met his first wife Jaye Posner in his high school days, who was a teacher. The couple got two daughters, Marjorie and Ellyn. However, they got separated in 1967 and divorced in 1969. His second marriage was to Marcia Murphey, a production assistant. They had two sons, Jesse and Micah, and their marriage ended in around 1995. Thereafter in 1996, he met with Rae Farley in Brisbane Australia and they had a long relationship. However, the two never got married. On April 21 2012, he got married to Katie McNeil, his manager after a relatively long love spell.