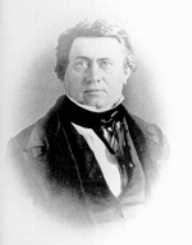 Joseph Henry started his career at a period when American Science was restricted to the elite and as an answer to the nation’s need for development. Joseph’s contributions in Science are beyond measure and human’s imagination. After Benjamin Franklin, he was the second most important American scientist. His discovery in the field of electric circuitry is very remarkable and outstanding. Joseph Henry is usually regarded for his great research in electromagnetism as well as the discovery of self-inductance.

He is credited as an inventor of the electric motor, electric doorbell as well as the electric telegraph. He is one of the founding members of the National Institute for the promotion of science. Joseph Henry also made perfect contributions to the development of American science. He is noteworthy and always respected by all as one of the giants in the field of science.

Joseph Henry is born to Ann Henry and William Henry who were Scottish immigrants. He was born in Albany, New York. He is a very diligent and highly hardworking fellow who at the time he was born, his parents were not monetarily buoyant. However, his father’s death brought about monetary hardship. He lived with his grandmother in Galway, New York and spent his childhood there.

He is known to have worked in a general store in addition to his schooling. He ventured into watchmaking and silversmith at the age of thirteen. Joseph Henry is known to have loved theatre and have wanted to go for it. He enjoyed free tuition education at Albany Academy where he schooled. As a student, he took up private tutoring apart from other works he does for monetary support. He was the intention of embracing medicine as his major.

He later changed his mind to go into engineering after he served as an assistant engineer for the survey state road which is being constructed. Joseph Henry outshined other students in his studies to the extent of being appointed the Professor of Mathematics and Natural Philosophy at the Albany Academy. He conducted most of his research as a professor in this school.

Most of Joseph’s works are carried out at Albany Academy where he worked in various areas of physical sciences before he ventured into electromagnetism. Joseph Henry also developed an interest in terrestrial magnetism, and this further pushed him into magnetism in general.

Successfully, Joseph Henry created what could be regarded as one of the first machines that used electromagnetism for motion. Henry was able to initiate the preliminary sort of ohms law independently. He also understood the fact self-inductance was greatly affected by the way circuit is configured especially by coiling wire. He was also the one that discovered that folding wire back on itself will make non-inductive windings. It was during this period that Henry Faraday was working with a similar idea. However, Faraday was officially recognized as the discoverer of the Phenomenon due to Henry’s slowness in publishing his work. However, self-inductance was credited to him.

He later consented to the post of the secretary of the new and unformed Smithsonian Institution. Joseph Henry later played a major part in giving scientific advice to governmental bodies. He also supported a wide range of groups including Volunteer weather observers which later became US Weather Bureau.

Joseph Henry married Harriet Henry with whom he had four children with. He, however, died on 13, May 1878 and was buried in Oak Hill Cemetery in Georgetown section of Northwest Washinton, DC. A cutter was christened in his name as a sign of honor for what he did. His name was also given to a standard electrical unit of inductive resistance in 1893. In 1915, he was introduced to the Hall of Fame for Great Americans. To his name, he has Joseph Henry Laboratories and Joseph Henry House at Princeton.