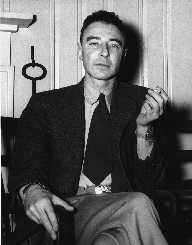 Julius Robert Oppenheimer was born 22nd April 1904, to Julius Oppenheimer and Ella Friedman. He was born in New York City, New York, in the United States. Oppenheimer's father arrived in the U.S. with nothing. He found a job in a textile company, and he became an executive over the next ten years. Oppenheimer's mother was a painter. He also had a younger brother, and he would go on to become a physicist as well.

After high school, Oppenheimer enrolled at Harvard College. He took additional studies to make up for lost time due to a year of illness. Oppenheimer studied chemistry as his major, but the college required their science students to learn literature, philosophy, mathematics, and history.

Oppenheimer excelled in physics, and an independent test allowed him to enter at the equivalent of graduate level. This meant he was able to take the advanced classes straight away.

After graduating, Oppenheimer enrolled into Christ's College at Cambridge. Two years later, he transferred to the University of Gottingen so he could study under Max Born. Gottingen was one of the leading facilities on the planet for studying theoretical physics.

In 1927, Oppenheimer achieved his Doctor of Philosophy. During his studies at Gottingen, he published over a dozen papers.

In 1927, the United States National Research Council granted Oppenheimer a fellowship. The fellowship was for the California Institute of Technology (Caltech), but Harvard also wanted him. Due to this, he split his time between the two facilities.

In 1928, Oppenheimer took a trip to Europe where he went to the University of Leiden in the Netherlands. He also visited the Swiss Federal Institute of Technology where he worked with Wolfgang Pauli.

After returning to America, he took the position of associate professor at the University of California in Berkeley. Oppenheimer accepted the offer. Shortly after he fell ill once again, and went to rest on a ranch in New Mexico with his brother.

The ranch became available for lease, so Oppenheimer took it, and he later bought it.

Oppenheimer had a very successful time at Berkeley, admired by his colleagues and students. He also worked with Ernest O. Lawrence. Lawrence won a Nobel Prize for his work with experimental physics. Oppenheimer helped Lawrence's students to understand what their data charts were saying.

In 1936, he received a full professorship at Berkeley.

He made significant contributions to the study of cosmic ray showers. Not only that, but Wills Lamb, one of his students, won a Nobel Prize in Physics in 1955.

The Oppenheimer-Phillips process was a theory developed by Oppenheimer and another of his students, Melba Phillips. The method forms part of study today.

Oppenheimer predicted the existence of positrons. Carl David Anderson discovered them and won the 1936 Nobel Prize in Physics for his work.

He then wrote a series of papers on astrophysics. In the late 1930s, Oppenheimer and one of his students predicted the existence of black holes. He worked on black holes and neutron stars and it was considered his most important work.

In October 1941, President Roosevelt approved the development of an atom bomb. Seven months later, Oppenheimer was invited to work on the project. One of his lecturers from Harvard, James B. Conant, was the Chairman of the National Defense Research Committee.

Oppenheimer worked on the calculations for fast neutrons.

The US Army started the Manhattan Engineer District in June 1942, to work on the atom bomb project. Oppenheimer was invited to lead the secret weapons laboratory. As a result, the authorities built the Los Alamos Laboratory.

By 1945, over 6,000 people worked on the project. His colleagues admired the vast knowledge Oppenheimer had across the various scientific subjects involved in the project.

On 16th July 1945, the first nuclear explosion test took place. Oppenheimer was sorry the bomb had not been ready in time to use on Nazi Germany. Oppenheimer and many of the staff were very upset when the second bomb fell on Nagasaki, They felt a second bomb on Japan was not necessary.

After the bombing of Japan, the public learned of the Manhattan Project. Oppenheimer became the front spokesman for science.

In 1945, Oppenheimer returned to lecturing, but he discovered he no longer wanted to teach. In 1947 he became the director of the Institute for Advanced Study in Princeton, New Jersey.

Over the next two years, physicists left their war work and went back to theoretical problem-solving.

Oppenheimer was on the Board of Consultants of the Atomic Energy Commission (AEC). They advised the President's committee about nuclear power. He believed there should be one global body to control all nuclear material.

With the recommendation rejected, Oppenheimer understood that an arms race would follow.

Oppenheimer's concern continued to grow with the potential danger posed by scientific inventions. He believed there was danger for humanity. Due to this, he teamed up with the most eminent minds of his time. He worked with names such as Albert Einstein and Bertrand Russell to start the World Academy of Art and Science.

Oppenheimer continued to work with physics, and he lectured and wrote about physics. He also traveled overseas to give talks.

Between 1954 and 1964, Oppenheimer released three books. After his death, three more books were published. The titles include Science and the Common Understanding, The Open Mind, and The Flying Trapeze.

Among his awards and honors, Oppenheimer has the following:

In 1940, Oppenheimer married Katherine "Kitty" Puening. They had two children together.