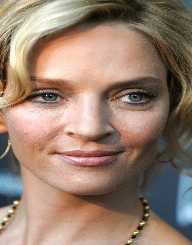 Uma Karuna Thurman is an award-winning American actress and model born on April 29, 1970. As an astute and talented actress, she has played roles in varieties of films, including action, romantic comedy, science fiction and dramas.

Uma Thurman made an acting debut in 1987 in the film Kiss Daddy Goodnight as Laura and later in Johny Be Good, 1988 as Georgia Elkans and Dangerous Liaisons in 1988 as Cecile de Volanges. She had previously made a modeling career debut and in December 1985 and May 1986 appeared on the cover of British Vogue. Thurman acted in several films but came to limelight with the movie Pulp Fiction in 1994 where she played Mia Wallace.

Her performance gained her nominations for the Academy Award, Golden Globe for Best Supporting Actress and the BAFTA Award. However, it was the film Hysterical Blindness in 2002 which won her the first major award, Golden Globe for Best Actress in 2003. She has since played roles in films like Kill Bill, 2003-2004, Be Cool, 2005, The Producers, 2005 and My Super Ex-Girlfriend in 2006.

Uma Thurman was born on April 29, 1970, in Boston, Massachusetts to Robert Alexander Farrar Thurman and Nena con Schlebrugge. Her father was an academic writer and of Indo-Tibetan Buddhist Studies and her mother is a high-fashion model. She has three brothers and a half-sister.

Uma Thurman was brought up in a Buddhist way spending two years in Almora but most of her latter days were spent in Amherst, Massachusetts. She started her education in the Amherst Public Schools and continued to the Amherst Regional Middle School. With her body structure and other odd female features like having a big leg and nose, height, she was normally teased by friends to the extent that her mother suggested a nose job when she was ten years.

Uma Thurman occasionally suffered body dysmorphic disorder as a child. Thurman fell in love with acting when she was in eighth grade and was discovered by talent scouts when she played Abigail in The Crucible. They then offered her the opportunity of making acting her profession. With this Thurman had to drop out from the Northfield Mount Hermon School to pursue an acting career.

At age 15 Uma Thurman started a career in modeling and was signed to Click Model. She has modeled at Glamour and also appeared on the cover of British Vogue in December 1985 and May 1986.

Three years into her modeling career, she ventured into acting in 1988 playing roles in Johny Be Good, Kiss Daddy Goodnight and The Adventures of Baron Munchausen. That year, she also played in Dangerous Liaisons where she played Cecile de Volanges. The movie was a commercial success and won an Oscar. Thurman performance also gained excellent reviews from critics.

Uma Thurman started the 1990s appearing in Henry & Jane an N-17 sexually provocative drama. The following year played Maid Marian in British Adventure film Robin Hood and followed it with the drama Final Analysis which co-starred Richard Gere and Kim Basinger. Thurman won the Golden Raspberry Award for Worst Actress for her role in Gus Van Sant’s adaptation of Tom Robbins’ novel Even Cowgirls Get the Blues which had negative reviews upon its release.

Uma Thurman gained much recognition and came into limelight with her role in Pulp Fiction in 1994. The film was very successful and received a positive review, grossing US$213.9 million worldwide. Most critics panned the movie as the most excellent film ever made. The film gained her several nominations including Academy Award for Best Supporting Actress and a Golden Globe Award.

Uma Thurman fellow-films were two romantic comedies Beautiful Girls and  The Truth About Cats & Dogs in 1996.  Her other movies include Gattaca, 1997, Batman & Robin, 1997 which received unfavourable critic and reviews and was considered as one of the worst films of all time. Nonetheless, Thurman had positive reviews and earned a Blockbuster Entertainment Award for Best Sci-fi Actress. That year seemed not to be a good for Thurman as she also starred in The Avengers which was a flop and received negative review receiving a Razzie Award nomination for her role.

The movie won her a Golden Globe Award and had favorable reviews. In 2003-2004 she played Beatrix Kiddo in Quentin Tarantino’s martial arts film Kill Bill. Thurman played the role of a lady seeking for revenge against her ex-lover. The part gained her nominations in Golden Globe and MTV Movie Award for Best Female Performance and Best Fight.

Uma Thurman rose in fame and with that commensurate salary of $12.5 million per film. Many roles also followed with her playing roles in Be Cool, Get Shorty and her role as Ulla The Producer all in 2005. Her other films in the 2000s include My Super Ex-Girlfriend, 2006, The Life Before Her Eyes, 2007, The Accidental Husband and Motherhood in 2009.

The decade started with a role in Percy Jackson & the Olympians: The Lightning Thief, 2010, Bel Ami, 2012, the drama series Smash where she played Rebecca Duvall gaining her nominations in Primetime Emmy Award for Outstanding Guest Actress in a Drama Series. She also played in Playing for Keeps, 2012, Nymphomaniac, 2013, The Mundane Goddess, The Gift and Jump in 2014 which won her BAMBO Award for Best International Actress. Others included The Slap, 2015 and Burnt in 2015 of which she played Simone, a famed restaurant critic. Her latest film is Imposter,  which was premiered in 2017 and is scheduled to star in The House That Jack Built.

Uma Thurman in 1990 married actor Gary Oldman, but divorced in 1992. The couple met during the shooting of State of Grace. She later met actor Ethan Hawke on the set of Gattaca in 1997 and a year later on May 1, 1998, got married. They had two children and separated in 2003 but officially divorced in August 2005.

Uma Thurman later dated London-based French financier Arpad Busson in 2007 but their planned engagement announced in June 2008 was canceled in 2009 but later came together. In 2012 they had a daughter Rosalind Arusha Arkadina Altalune Florence. Thurman was rumored to be dating director Quentin Tarantino, but the claims were denied. She had previously in 2004 dated hotelier Andre Balazs but separated in 2007 and has since 2015 reconciled.

Uma Thurman has won several awards throughout her career, and her first award was the Cognac Festival du Film Policier in 1993 and 2001 won Best Actress at the Gotham Awards.